Diving into “deep trade” could help the EU to stay afloat

Levelling the playing field has become the leitmotif of Brussels’ talks. Whether it be climate, competition, or human rights, globalization has made it clear that European internal regulations must go hand in hand with an appropriate foreign policy strategy. EU’s great strides in shaping a fair common market have been as successful within the Single Market as disadvantageous when competing with countries that do not abide by the same rules. However, weakening its policies would not help the EU accomplish its goals. Getting other countries on board could.

The White Paper on foreign subsidies issued by the European Commission in June 2020 goes in that direction. Under the proposed regulation, the Commission hopes to address distortions caused by foreign subsidies, especially as regards investments. In the absence of trade distortions, the growth of EU export deficit with China in 2008-2014 would have been halved, according to the 21st Global Trade Alert Report. China is the elephant in the room, but much of this has to do with the US too. The average size of grants awarded to US firms has soared over time (See Figure 1). Caught between Chinese and US leviathans, the only way out for the EU is praying for fairer multilateralism. The big question is how to make global norms enforceable. 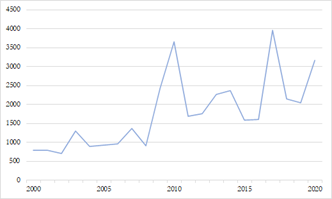 Source: Own calculations based on Subsidy Tracker.

As spreading supply chains urgently call for global regulations, trade itself offers a solution. Recent studies have highlighted that, by linking trade and non-trade policy objectives (NTPOs), both global trade and welfare could be boosted. In this process, there is a leading role for the EU to play. “Trade is not an end in itself,” President Von der Leyen says, “it is a means to deliver prosperity at home and to export our values across the world.” The EU has for long traded market access for NTPOs. Through GSP+, it conditioned preferential trade upon efforts by developing countries to meet civil and political standards. Figures from a new GSP+ Compliance Index[1] point to an average growth of 5.8% in beneficiary countries’ compliance scores in 2010-2015. The success of the scheme is in part because preferences are granted unilaterally, acting as a “carrot-and-stick” mechanism. When Sri Lanka joined GSP+, in 2005, its garment exports’ share to the EU increased from 36% to 49% in five years. However, the carrot was as sweet as the stick was painful when, five years later, preferential tariffs were removed due to human rights infringements.

But unilateral preferences cannot be granted to everyone. Nor, luckily, are they the only way of putting conditionality on trade. Commitments on climate and competition, among others, are already included in many preferential trade agreements (PTAs), most notably in recent deals. Economists refer to them as “deep trade agreements” (DTAs). Many of the over 300 agreements currently in place have extended their reach well beyond tariffs, aiming to achieve integration beyond trade. As of 2000, PTAs’ coverage ratio—defined as the share of provisions contained in an agreement relative to the maximum number of provisions—exceeded 25%, as reckoned by the WTO. This stands in contrast to the 15% coverage ratio of agreements signed in the ‘90s.

The eBook on DTAs released by CEPR and the World Bank this month (https://voxeu.org/content/economics-deep-trade-agreements-new-ebook) sheds the light on the determinants and consequences of deep trade. The research carries the signatures of leading academia and policy experts in international trade. On one hand, it points to positive but heterogenous effects of DTAs on trade and non-trade outcomes, which are mainly driven by those (enforceable) provisions that go beyond WTO rules. On the other hand, it observes that deep integration goes hand-in-hand with strong policy spillovers. Still, the inclusion of rules in trade agreements can also be influenced by political economy forces, such as lobbying by large corporations.

With 230 agreements currently in place, the EU has the greatest potential for being a leader in re-shaping free trade. The first moves have already been made. According to recent statistics on the “depth” of PTAs, EU trade deals mention 15.28 obligations on average outside the current mandate of the WTO. Other countries cite 6.50. Competition policy, mentioned by around 85% of EU PTAs, is a recurrent topic (See Figure 2). 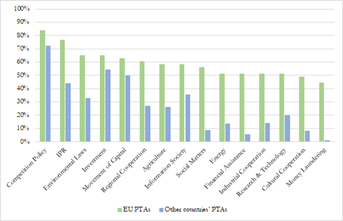 Source: Own calculations based on Mattoo et al. (2020). EC treaties and annexations are excluded.

Still, there is room for improvement. Figures speak for themselves. Nearly 20% of the provisions in EU PTAs are legally enforceable. Provisions on competition policies are included in 36 agreements. Yet, only in 20 of them can such provisions be invoked in dispute settlement proceedings. As it stands, “deep trade” is far from perfect, but the EU can lead the way to it. This requires enforcing already existing provisions and extending legal enforcement to others. As of today, the EU accounts for around 15% of the world’s trade in goods. Its leadership, together with its well-established regulatory system, raise it to the role of global regulator. Trading tariffs for regulations might help getting more emerging economies on board. Recent research estimated that DTAs even boost trade in services (+30%), to which neither tariffs nor subsidy rules apply (https://voxeu.org/article/trade-and-welfare-benefits-deep-trade-agreements). Exporting EU values through trade might help levelling the playing field, not least setting subsidies rules.

As for subsidies, there is always the `cheap’ solution. Countervailing duties have been increasingly used by the US as a way out of foreign subsidization (See Figure 3). Afterall, they are the natural tool provided by WTO rules. Yet, with 60% more cases initiated in the past five years than in the five years before, it is hard not to see American duties as playing politics. Also, sanctions beget countersanctions. Not to mention concerns regarding the limited applicability of WTO rules. As they stand, anti-subsidy rules cannot give the desired effect. Nor can Europe rely on EU giants to shape global norms. But, in a world with rising protectionism, the EU could still emerge by swimming against the tide and exporting its regulations. Trade tools are already sketched. Details should be carefully drawn. 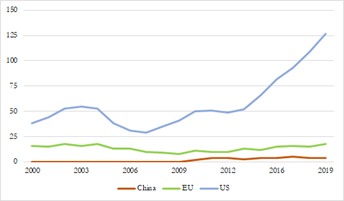 Source: Own calculations based on WTO data.

The last three US elections have witnessed the abrupt establishment of technological innovation in political campaigning that has reshaped ordinary practices in this field worldwide….