Charles Michel, President of the European Council, and Ursula von der Leyen, President of the European Commission, travelled to Turkey to meet the Turkish president Recep Erdogan in Ankara. In front of the press, they entered a room with two chairs. For three people. Who will sit on these chairs and who will get the couch, ca. 2-3m away from the main stage? Of course, both Michel and Erdogan sit down, leaving von der Leyen baffled, voicing a surprised and very German expression: “Ähm?”. Because she cannot believe it. And neither can I. What does Michel do? Nothing. He sits down on his chair.

The reactions to this were mixed. Jean Claude Juncker explained in a telephone interview to Politico how he also “sometimes” during visits had to sit on the sofa[1]. This visit was to Turkey though, a country that on the 20th of March withdrew from the Istanbul Convention, and therefore abandoned a treaty that aims to protect women from (domestic) violence. The reason: According to Erdogan, the treaty was hijacked by the LGBTQ community, and Turkey’s family values are not in accordance with homosexuality[2]. The signal was clear: Women belong to the sideline, and certainly not on the main stage. 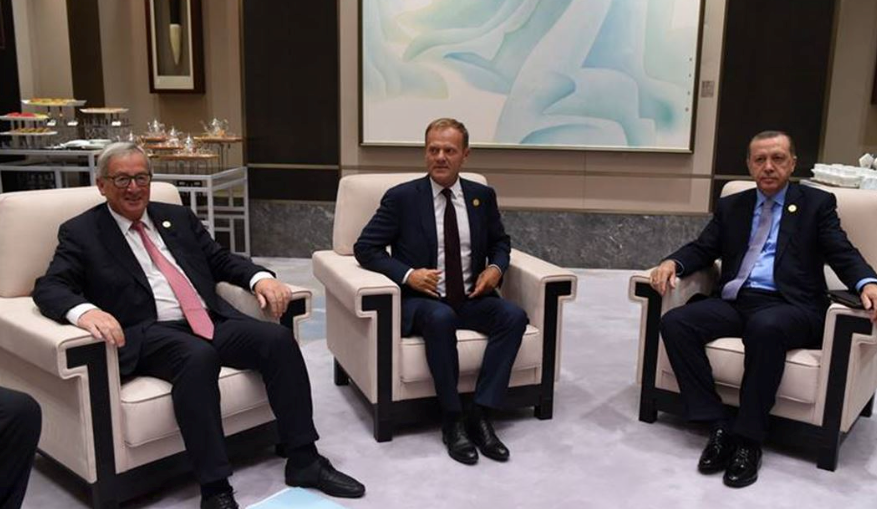 Why am I surprised though? Women in leadership positions always have to be a bit more prepared, a bit louder, a bit tougher than their male counterparts. During the World Women’s Day on the 8th of March, LinkedIn was full of men posting around all these “wonderful women” in their lives, talking about their mothers and daughters and how they are the reason that they want a world with equal opportunities. Because we all know that having a mother (like literally everyone on this planet) makes it impossible for one to be a misogynist. Men hand us roses, the same men that then go on to call their female colleague “honey”, interrupting them during meetings, and think a “little butt clap” is fun, we all need to “lighten up, right?”. Companies turn their icon pink, the same companies that are still far away from a 50/50 ratio on their board of directors. Even though sexism is omni-present, men (and women) often fail to see it. Or they see it but don’t want to name it. Why do we have such a problem in realizing that our society has a structural problem? Instead, men make up excuses when you tell them about that client at work who told your boss that he does not think you can handle his case because you are a woman. Some women on my Instagram recently shared messages they got from men, one saying that he wishes her cancer and hope she dies because he thinks the boots on her picture were too “slutty”.

Men like to stress that not all men are like this, but it’s still quite a lot of men. In Germany, every three days a woman is killed by her partner or ex-partner[3]. Each day, there is an attempted murder. Another reason why treaties such as the Istanbul Convention are an important step to bring this issue on the agenda. In an initiative called “Sexism in Academia”[4] at Copenhagen Business School, researchers investigate further sexism at universities. By structuring that knowledge and defining sexual harassment in all forms, the issue can be investigated. From that research we know, that sexual harassment is an iceberg, a sliding scale, with micro aggressions such as slapping your co-workers butt and getting away with it opening up the doors to more severe, violent sexual harassment. When the research started, the professors asked for stories from colleagues at the university. After two days, they already had collected 700 incidents.

There is a structural problem, and both men and women suffer under it. Traditional male values are posed on all of us. In the workplace, women are required to “toughen up”, men are ridiculed when taking paternity leave. We are slaves to gender roles, created by a system that is thousands of years old. Men made the rules in all aspects of society. Now it’s time to change that. The patriarchy does not work anymore, for all of us. This is also why we need to support each other in changing it.

In Germany, we have a law called “Failure to stop and render aid”. If you see an accident where someone is injured and you don’t help, you can be punished for it, with up to one year in prison. Dear Mr. Michel! That was your chance. You could have asked for a chair for Mrs. Von der Leyen. You could have offered your chair to her. Following a diplomatic protocol is an excuse, and not a good one. If the protocol is misogynistic, it is outdated, like many other rules in our society that tell women what they can do and what they can’t do. We are in 2021. Change the rules to the game. Both men and women have to take this responsibility. By keeping quiet, you are supporting the system. If you don’t say anything if a woman is mistreated, you are not a feminist.

Abstract The epidemiological COVID-19 crisis is probably the hardest challenge the European Union has ever faced since its foundation, proving to be an even harder…