Europe is facing complex economic challenges which should be answered by well thought-out policy schemes. It is the belief that the European Union’s ambition should be to lead the collective solution to meet these challenges. It ought to apply its practical knowledge to lead impactful change within the public and private sector.

This crucial time in history may be seen as an “opportunity” to rethink the way tax burdens are established. That is, Europe has long been inefficiently operating in terms of innovation. Needless to say, this scenario has made Europe unable to compete with tech superpowers such as the US and China. For this reason, the main goal for EU authorities should be to establish a sound internal market. The rationale shall be to encourage innovation and entrepreneurship in order to boost the continent’s growth. This writing will be analyzing the current European tax ecosystem. Thus, the question of how digitalization and sustainable innovation could help the EU optimize its tax approach will be addressed.

Before arguing which strategy is more profitable for a certain nation, or the EU as a whole, fundamental issues must be discussed. What are the priorities of the EU at the moment? Which are the main concerns of the European population? Are there any common goals that should be taken into account? By answering these questions, policymakers would be able to understand beforehand the direction the general public wants to go to. As a case in point, according to the International Tax Competitiveness Index (ITCI), the most important features that should be present for a tax policy scheme to be successful are competitiveness and neutrality. In addition, when talking about policy schemes it is important to look at facts. While income, property and consumption taxes are more favorable, corporate taxes tend to disincentivize economic growth. Strictly speaking, discussions on the needs and wants of the EU should be urged by tax authorities.

During the last period of time, governments around the world have started the discussion on how to address digital transformation. It is no secret that the recent pandemic has shown the importance of the transition to a digitalized economy and, as it happens with every disruption, a discussion about taxes should be held.

To contextualize, the development of digital technologies has considerably shaped our daily lives in a variety of ways. While contributing to the well-being of the population, digitalization has also raised important legal and regulatory concerns. In the European context, for instance, the affluence of online presence in businesses has forced authorities to rethink the taxation of companies’ income. In particular, the absence of physical presence by multinational companies in the Member States – or MS – in which they operate has made it more complex for the proper administration to allocate economic obligations.

Hence, the main concern for the EU should be the pessimistic environment on the taxation of digital services. Be it for its complex nature, it has been challenging arriving to a consensus amongst MS. Nevertheless, French authorities have decided to focus its efforts on the protection of digital services consumers and the data extracted from them. For this reason, they implemented a system of digital services taxes (DSTs) on the so-called “big players” in the field. However, it is useful to understand the present conditions of DSTs in Europe. Notice in next Figure that during the last years there has been an increase in the adoption of this kind of strategy. Nevertheless, they largely differ in their content. On the one hand, consider the French example mentioned before, whose tax revenue comes from its imposed duties on targeted advertising, collection of data for advertising functions, and the supply of a digital interface [1].  On the other hand, Hungary 1 and Austria tax earnings come from online advertising only. In addition, DSTs vary in its amount: the UK has a 2 percent tax rate while Turkey proposes 7.5 percent. [2] 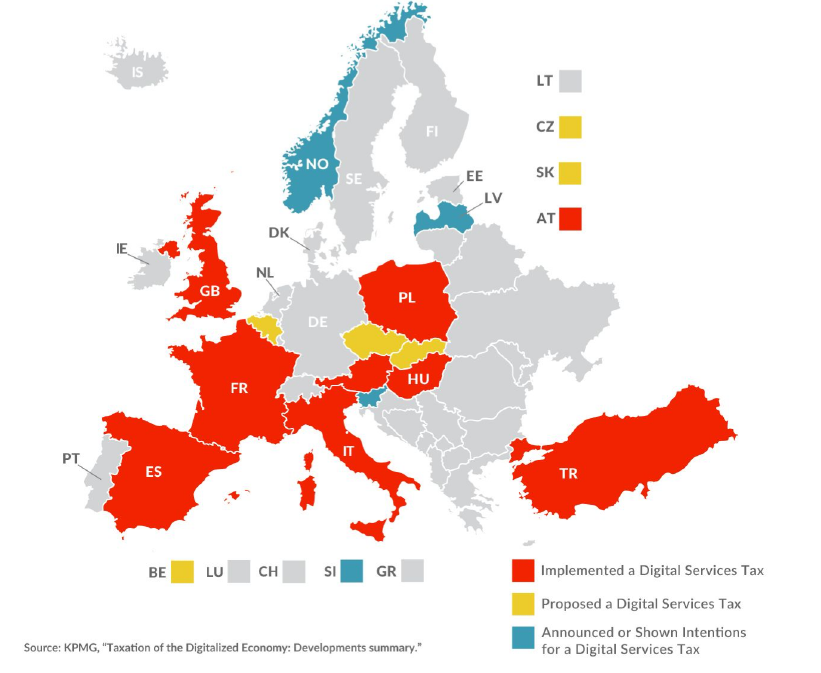 Within this context, it is useful to discuss again the above mentioned attribute of neutrality. By which it means, progress induces the sophistication of tax policies, which critically undermines fairness and justice for the general public. With regard to the multinational
companies operating in foreign countries, they could be incentivized to take advantage of favorable tax systems. The latter widely threatens impartiality, as well as the consolidation of the European Union authority, as well as its MS. This article proposes a centralized European tax strategy that advocates for long-lasting economic development and expenditure. In addition, it should also comply with its duty to pay credit to the respective authorities.

Specially in the short term, the issue of centralization is extremely relevant in the context of digitalization. This writing calls for governments and institutions, as well as households, to be open-minded on the future of taxation. With the increasing tendency to overcome borders, either physically or not, taxation has become disproportionately bureaucratized. The latter is especially true for countries like Italy or Poland. In the present day, a multinational company that is keen on operating (or already operates) in the EU has to face 27 different accounting systems. This implies an enormous waste of resources, time, and capital.

One successful story is that of Estonia, with its best tax code in the OECD for the seventh year in a row according to the 2020 ITCI [3]. Since its independence from 3 the Soviet Union in 1991, the nation has engaged in strategic reforms to modernize the economy, and have
been able to prosperously adapt their tax strategies to it. This achievement is the result of four well-structured pillars. Firstly, in the context of corporate taxes, the nation has a 20 percent tax that applies only to distributed profits. In turn, personal dividend income is not taxed by the 20 percent tax on individual income. The value of real property or capital is not taken into account for the property tax, rather it only applies to the value of land. Lastly, the nation has effectively installed a territorial tax system that is proving to be utterly productive. It exempts domestic companies operating in foreign countries from domestic taxation of those profits. Needless to say, tax codes cannot be taken as standardized models since every country is different, but other European states should look up to the
Estonian recipe for success.

European authorities should strive for an adapted version of the Estonian territorial tax system in accordance with its goals and mission. Operating outside national borders and within European ones may be reassured with this system. Businesses in individual MS are often skeptical when it comes to expanding their business to Europe, let alone overseas. This could happen for a variety of reasons that lie outside the scope of this writing, the aim is to focus on a possible tax solution. That is, a centralized European ecosystem should be supported by the authorities to encourage sustainable economic development and investment, while complying with national obligations. The rationale is that MS should not regard each other as foreign countries, but as part of the same community that succeeds omnes simul. In this way, Europe would be able to sustain itself without the presence of well-established corporations from overseas. Namely, it is time for the continent to stand up for itself because only in this way it would be free to walk away from the previously mentioned tech superpowers.

The disparity between the EU, and the increasingly digitalized US and China could be attributed to a variety of reasons: lack of investment, absence of a well-established capital market, scarcity of tools and skills, unqualified human capital, and so forth. Therefore, the European community necessitates a system that is capable of (i) assuring a proper tax collection and distribution system in all MS, while (ii) maximizing benefits by encouraging innovation amongst business and government leaders. On these grounds, a different perspective regarding the function of taxes in modern society should be established. In other words, they must be seen as an incentive for the reconstruction of the common market and not as duty from which to escape. Nevertheless, what is most needed at the time is strong leadership with specific goals, specially taking into account the existing polarization within the European single market with regard to tax policies.

To conclude, it is imperative for European authorities to ensure a fair and competitive transition towards a digitalized tax ecosystem. Most importantly, their role is to guarantee that the digital transition happens for all the countries in the community. For this reason, the main goal for the European Union should be to give control to the citizens and businesses in order to conceive a real sense to our democracy.

[1] A 3 percent tax is paid by these companies. In addition, businesses with a comprehensive revenue of €750m or more, and French sales of at least €25m are urged to satisfy the tax burden. [2] Asen, E. (2020). Digital Services Taxes in Europe. Retrieved December 09, 2020, from https://taxfoundation.org/digital-tax-europe-2020/ [3] Bunn, D., & Asen, E. (2020). International Tax Competitiveness Index 2020. Retrieved December 06, 2020, from https://taxfoundation.org/publications/international-tax-competitiveness-index/

Graduated in Business and Economics at the University of Bologna, with an interest in digital economy and AI.