As many already know, a recent study [Greaves et al. 2020] suggested the presence in the cloud decks of Venus of phosphine, a gas that could indicate the presence of biological life.

This signature was detected by state-of-the-art spectrometers inside the James Clerk Maxwell Telescope (JCMT), a radio telescope at Mauna Kea Observatory in Hawaii, and the Atacama Large Millimeter/submillimeter Array (ALMA), which is a set of 66 radio telescopes that can be combined with interferometric techniques to drastically increase the accuracy of their measurements.

To properly understand the context, spectroscopy is a technique that lets us remotely detect, with the use of ad-hoc instruments, the presence of specific compounds via the analysis of the incoming light from an observed object. In other words each chemical compound, because of its unique configuration, interacts differently with light and has de-facto a different “color”, be it from the visible light spectrum, the infrared band, the UV band, etc.

With an adequately high resolution, our modern instruments are capable of analyzing the incoming light from a specific target and distinguishing even the most similar “colors”, making us therefore understand the chemical composition of the observed object. Have you ever tried to spin a wheel of colors? If you did you might have noticed that by spinning it fast enough it looks like the whole wheel seems to turn completely white. Using a very overly-simplified metaphor, our detectors are able to detect all the colors of the spinning wheel regardless of its rotational velocity.

In our specific case, phosphine is a molecule composed by three atoms of hydrogen and one atom of phosphorus (PH3) and has a strong spectral signature in the radio waves band, which has been detected with the above mentioned telescopes.

Why the detection of phosphine is so important? Because despite the little we know about its chemistry, traces of PH3  in our atmosphere are know to be produced exclusively by human activities and microbes!

For the sake of completeness, one must say that the link between PH3 and biological life is backed only by (strong) circumstantial evidence [Sousa-Silva et al., 2019]. The facts at our disposal right now show indeed that phosphine has been found in anoxic (lacking oxygen) environments where there is a strong microbial activity, but:

Nevertheless, as pointed out by Sousa-Silva, “the absence of a known enzymatic mechanism is not evidence for the absence of biological production”. As a matter of fact we don’t know how the synthesis of most life-produced compounds works at all!

Additionally phosphine can naturally form even without the presence of biological activity, but to do so it requires levels of temperature, pressure and a chemical composition that are only found inside the deep atmospheric layers of giant planets like Jupiter or Saturn. To our knowledge, rocky planets like Earth or Venus are not capable of abiotically producing phosphine.

According to researchers, the fact that this compound has been found on the cloud decks of Venus rather than on its surface is another promising result that could make everyone humbly hope for the presence of life. This is due to the fact that the clouds on Venus constantly shade the whole planetary surface from sunlight and never dissipate, which is far from what happens on Earth where clouds only cover a fraction of the global surface and can continuously dissipate and re-form. This means that small organisms could potentially form inside these decks and never fall down on the planet’s surface, which has astonishingly high levels of pressure and temperature. The estimated altitude where this compound was found is at least 53 km. Being therefore above the threshold of the extreme greenhouse effect that makes the planet an accurate metaphor of Hell, these potential lifeforms could enjoy earth-like pressure and temperatures up to 30 °C.

On the other hand, these potential organisms are supposed to survive under a completely different chemical composition of their surroundings: the Venusian atmosphere is mostly composed by carbon dioxide and its cloud droplets are mainly made of sulphuric acid, which makes the whole environment several times more corrosive than any earth-born organism (including extremophiles) could hope to survive.

This is nevertheless unlikely to be an impenetrable wall for life. Judging potential life forms on other planets using the ones we have on Earth as universal standards is a kind of Earth-chauvinism, which is not that different from assuming alien civilizations in our universe speak English or eat pizza: we cannot extend the little we know about life to everything we do not know.

With this kind of information, everyone must try to balance caution with optimism to neither diminish nor overly-increase the value of this discovery. 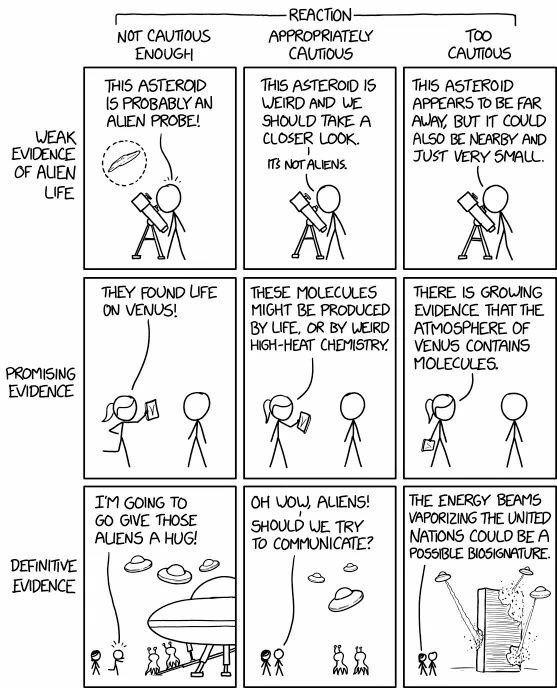 It must be nevertheless said that phosphine is not a well-known chemical compound, considering the small number of applications in modern industry and pharmaceutics. We don’t therefore have a comprehensive understanding of its chemistry and its traces could even easily be produced by an unknown high-temperature phenomenon that has nothing to do with living organisms!

During the months following this discovery, as summarized by A. Witze [Nature 587, 532 (2020)], several studies showed opposite results that questioned Greaves’ discovery. After a reanalysis, her team found out that there was a processing error that lead to an overestimation of the phosphine signal. Even with this correction the signal is nevertheless present (although in a fainter way) and it cannot be so far explained by any non-biological pathway.

If a solid confirmation will eventually arrive, in the worst case scenario we will have a better understanding of the chemical behavior of phosphine, while in the best one we will know that we are not alone, even if this will mean that our neighbours are simple life forms proliferating on the cloud decks of a corrosive and uninhabitable planet like Venus.