If you followed the news lately, you might have read about government stimulus plans around the world. What’s stunning however are not the plans themselves, but the sheer sums involved. While the $484 billion stimulus package passed by the U.S. Senate in April might still be conceivable, the $3 trillion loaned in a few weeks by the Federal Reserve is much less so; how many zeros does a trillion have again? You might then rightfully ask yourself: “Why is the previously bankrupt government now bailing everyone out? Is this without consequences? How did we get here? What even is going on with money these days?” The answer to that last question simply is that we don’t really know. But to understand how we got to where we are now, we need to turn back the clock.

When Milton Friedman stormed the global economic scene in the 1970s, we thought we finally figured out how money works, and designed elaborate monetary policies accordingly.

The broad idea was that the greater the amount of money in the economy, the higher the inflation rate, which measures the evolution in overall price levels. Historically, central banks (the bankers’ banks) would indirectly control the cost of borrowing money through their interest rates, rising or lowering them to keep the money supply stable. Cheap money was nice to grease up the economy and stimulate investment; a little bit of inflation would ensure that people want to buy now and keep spending their money instead of having it exit circulation through inactive savings. Note that to do so, individual agents need to know what exactly to expect; when facing uncertainty, people get worried and start stuffing their mattress with cash. But inflation can also be dangerous, as too much of it turns into a self-feeding loop, a so-called “hyperinflation” (think Venezuela).

Government would thus chase the economy through an endless cycle of increases and decreases of the general interest rate, aiming for a sustained 2% inflation objective. To give you an idea, think back to the 2013 mobile game “Flappy Bird”, with a moment of latency between the moment you touch the screen and the moment the bird rises. Mechanically torturous but conceptually quite simple. 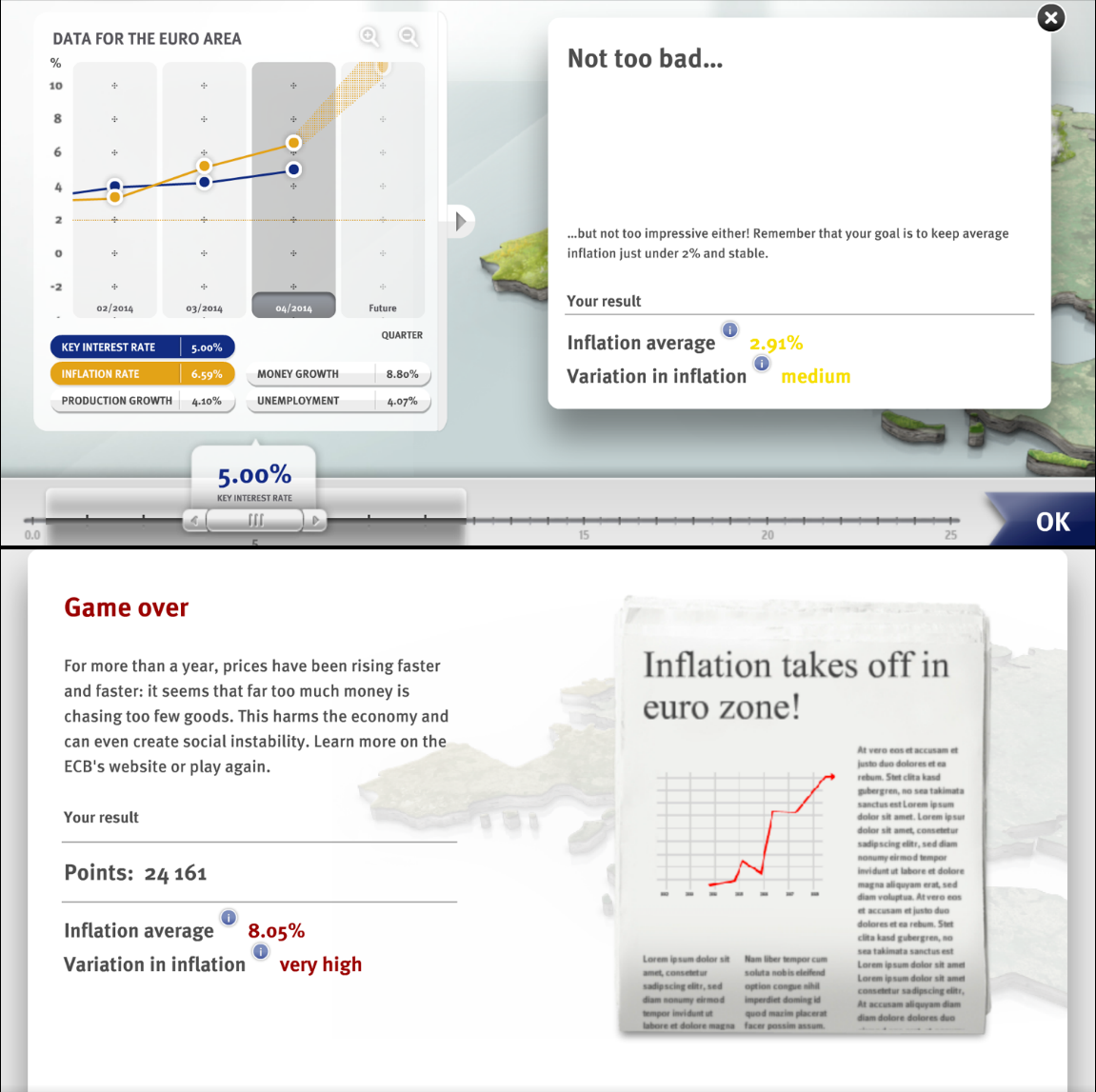 On the ECB’s website, you can step in the boots of a central banker yourself with “€conomia”.
Your sole purpose is to adapt to changing inflation by monitoring the key interest rate. Quite difficult, actually.

Then the 2008 financial crisis happened, and with it came the Great Recession and the subsequent euro crisis. As you may have heard before, all hell broke loose. People massively defaulting on mortgage loans meant that, all of a sudden, banks had no money left in their coffers. Nobody wanted to purchase anything anymore, and banks didn’t want to lend any money.  The issue is that banks lending money drives money creation. When no one wants to lend money, the money creation mechanism stops and deflation looms. To avoid that, governments made money extremely cheap to borrow (by massively cutting the interest rate), committed to sustaining this as as long as needed, and even injected high amounts of new money into the economy through quantitative easing (essentially the central bank printing new money to buy government debt).

As “Super Mario” Draghi, then director of the European Central Bank put it, public authorities did “whatever necessary” to keep banks working properly, and the sums involved in these new “unconventional policies” were gigantic, accumulating into several trillion euros in the case of the ECB. To save the economy from deflation, states exposed themselves to the dangers that such drastic measures could bring about: a monetary boom of the machine and the advent of hyperinflation ; imagine the “Flappy Bird” flying so high it leaves your screen.

Little of this actually happened. Inflation returned to reasonable, if highly volatile levels. But the costs associated with a loan, the interest rates, hit rock bottom. And for some extremely safe assets, they even dug deeper than that: with negative interest rates on German government bonds, people were now paying to be able to lend money to Germany. On the “real economy” side, investment levels for non-financial companies only started picking up again in the late 2010s, and were just approaching their pre-crisis level in 2019 in the eurozone. In any case, we were far from hyperinflation. Reassuring, isn’t it?

Things did not go according to plan. Credits: Hedgeye

Economists and policy makers were left aghast. Imagine a “Where is your God now?” moment for old intellectuals in armchairs. Central banks made the size of their balance sheets explode, lowered their interest rates as much as possible, and still nothing was happening. It’s almost as if the laws of thermodynamics suddenly stopped working; complete chaos. To paraphrase the famous quote by Gerald Bouey, the Governor of the Bank of Canada in 1982, it is not we who abandoned monetary policy. Monetary policy abandoned us.

Following this debacle, many are now trying to explain this new monetary reality—and with relative success. The general hunch is that the velocity of money, the speed at which it circulates in the economy, has fallen. More intuitively, it means that it passes from one hand to another much less frequently; problematic when you consider that the whole point of money is to be exchanged.

As to why this is the case, theories differ. Singaporean economist Richard Koo talks of a “balance sheet recession“, where accumulated debt jams the economy by forcing agents to repay said debt instead of investing in anything other than ultra-safe assets such as government bonds. American economist Larry Summers brought back the “secular stagnation” hypothesis instead: widespread anxiety due to exogenous factors destroys any investment perspective. Both explanations are as nastily and ferociously debated as old economists in armchairs are capable of.

The stakes have rarely been higher, yet the fog remains thick. The velocity of money, just like agents’ expectations, are concepts which are only poorly defined and measured. They both require a fundamentally new understanding which would uncover the missing part of the puzzle.

This brings us to where we are today, and as you can see, there is still room for further improvement of our understanding, as legions of academics are working full-time on the subject.

What is clear however is that, with the massive economic crisis provoked by the pandemic and what now seems to be the possibility of free money creation without apparent consequences, a great monetary bonanza has been unleashed. Governments which were previously trying to cut down on spending now indulge in massive borrowing of public debt, making the money machine churn out delirious amounts of bills. Significantly, Germany, the shining hill of debt-fearing rigourists, has decided to lay to waste its emblematic “black zero policy”—which required it to run an at least equilibrated budget at all times—and set out to borrow and spend 750€ billion at the snap of a finger, or rather at the stroke of a pen. On the other side of the Atlantic, the U.S. Democrats have just proposed a $3 trillion stimulus plan.

The evolution of the Fed’s total assets since June 2008. The recent hike barely fits the graph. Source : federalreserve.gov

Most impressive however are the balance sheets of the central banks, which now seem almost unreal. The Fed’s assets rose from $4 trillion to close to $7 trillion in a matter of months, a whopping 60% increase. The ECB held roughly 2.8€ trillion worth of assets at the end of 2019. At the rate of spending it is pursuing today, the number could be as high as 6€ trillion by the end of the year. And while classical theory taught us that such spending was likely to end badly, no one can credibly assert it will this time, nor why it could. Public spending might be free money  — a “free lunch”— after all.

Where is all this taking us? Can we go on with such unconceivable amounts without endangering the very meaning and understanding of money itself? The truth is that nobody really knows, even though many have discovered new divination talents to read into the future and formulate prophecies of a new world. To be sure, saving the economy from total collapse is certainly justified, and the amounts spent so far might not even be sufficient regarding what’s at stake. As for the final outcome, a part of it most certainly rests on expectations: whether agents feel confident in investing the money they have accumulated over the years. After all, and much like Scrooge McDuck, Apple currently sits on $207 billion, and spending some of that money in whichever capacity would definitely go a long way. Nevertheless, until someone proposes a new theory illuminating how money works, we are left in the dark, asking ourselves “What is going on?”

The Affordable Care Act, commonly called Obamacare, increased the number of Americans with an insurance coverage. However, there is a perceived growing disillusionment with this policy, which…