On 6th May 2020, the Vienna Institute for International Economic Studies (wiiw) held a webinar, focusing on the topic of Covid epidemic’s fallout on Central and Eastern Europe, CIS and the Balkans. The event’s title was “Looking for shelter from the storm” and it centred on a general presentation of the latest economic forecasts regarding such regions. Mario Holzner (Economist and Executive Director at wiiw) and Richard Grieveson (Economist, Deputy Director and coordinator at wiiw) debated the aforesaid subjects, providing an in-depth analysis of the current downturn.

In point of fact, economic growth plummeted to its worst levels since the early 1990s. Nevertheless, Eastern States were able to anticipate and contain the detrimental effects that a health crisis would have brought about, while preserving their production levels as much as possible. Consequently, it is not a stretch or a far-fetched consideration to say that the region has overall behaved correctly in this regard and safeguarded its health care systems hitherto before a possible collapse. Balkan countries have been able to limit the number of infections, by adopting extremely strict and rigid measures. A higher stringency index has meant less confirmed cases: thus far, this strategy has been proven effective in countering and slowing down the disease’s spread. Does it mean that said countries will be less impacted than their Western European neighbours? By looking at existing data, we could answer positively to the query, but the situation might still evolve in a way that we cannot precisely foresee. Meanwhile, manufacturing purchasing managers’ indices have shown a considerable decline.

When it comes to lockdowns’ impact on normal economic life, we can observe that Sweden was less affected by the overall context (it has been able to reduce shock-dependent repercussions to less than 20%), whereas Italy has experienced the most dramatic drop, due to the severe measures that have been implemented. 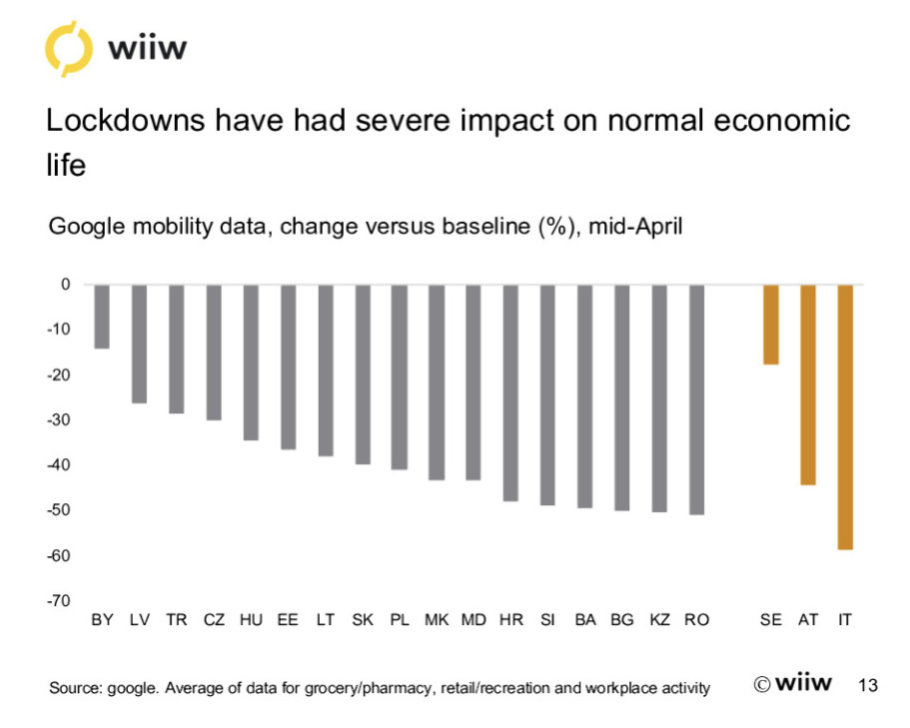 By observing charts, it is possible to state that Bosnia, Bulgaria, North Macedonia, Croatia and Slovenia, notwithstanding some less inflexible policies, have undergone processes on average similar to the Italian and Austrian trends. On the other hand, Turkey has been impacted much less (below -30%). Trade and tourism will leave Albania, Croatia, Montenegro, Estonia, Slovenia, Hungary and Slovakia most exposed to the pandemic’s economic fallout, in that external trade accounts for 70% to 200% of their GDP. Turkey, Bosnia, Romania, Serbia, Russia, Ukraine, Poland, Moldova and Kazakhstan shall not be as affected, as travel and tourism represent less than 15% and external trade only constitutes between 40% and 110% of their Gross Domestic Product. 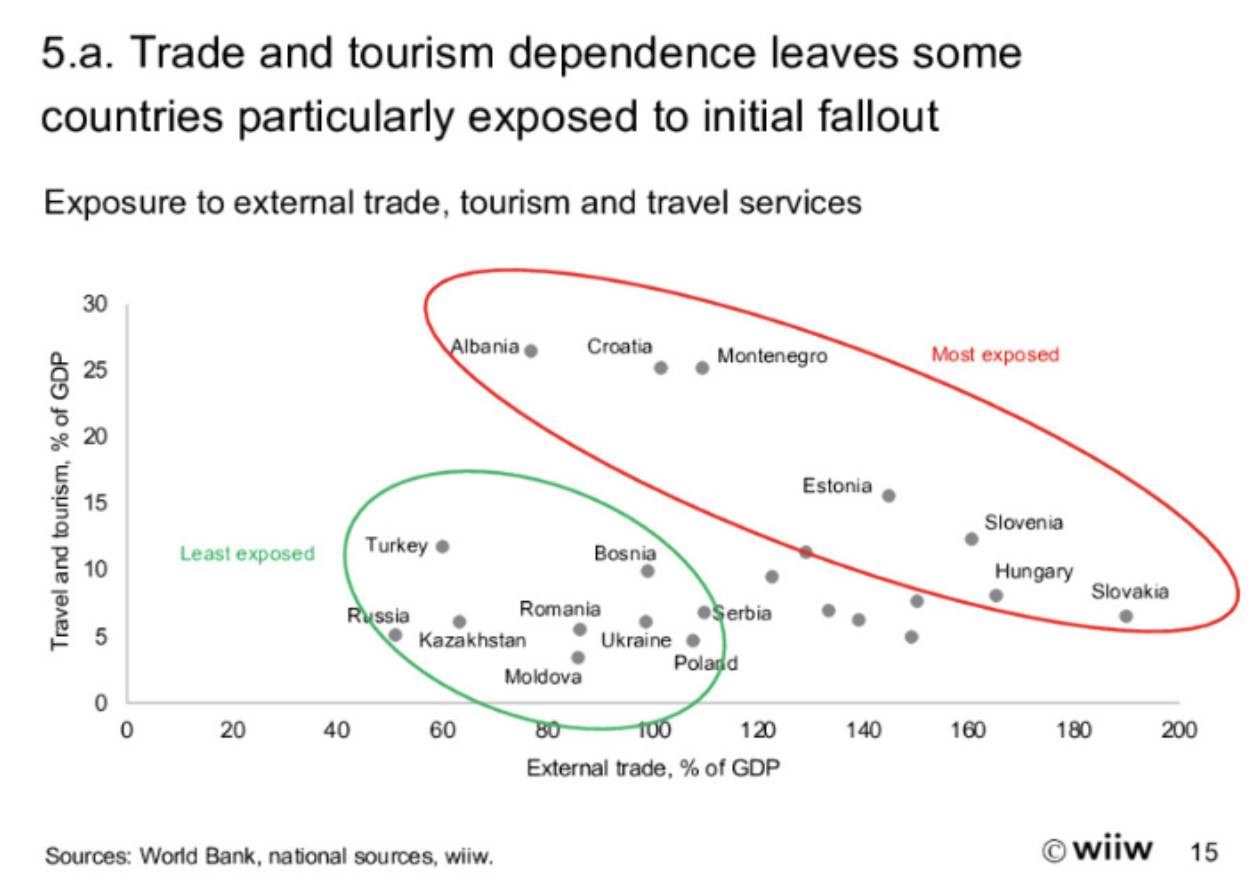 The degree of leeway and fiscal space that countries have must also be taken into consideration. The Czech Republic, Estonia, Latvia, Lithuania, Slovakia and Slovenia have lower risks when compared to Spain and Italy, albeit more than Sweden and Austria. Furthermore, reliance on capital flows certainly is a major area of exposure for most Western Balkan nations as well as Moldova and Ukraine. 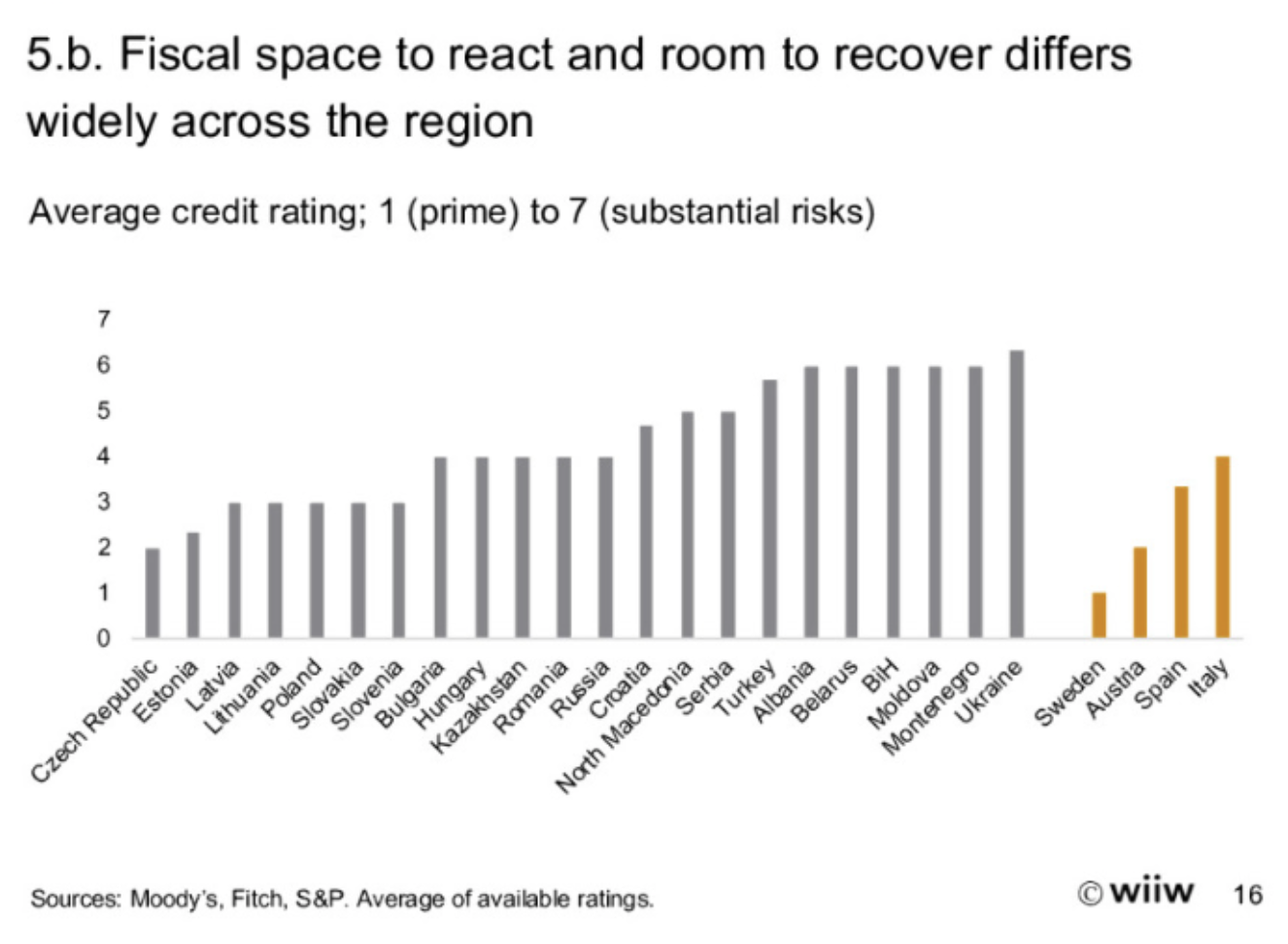 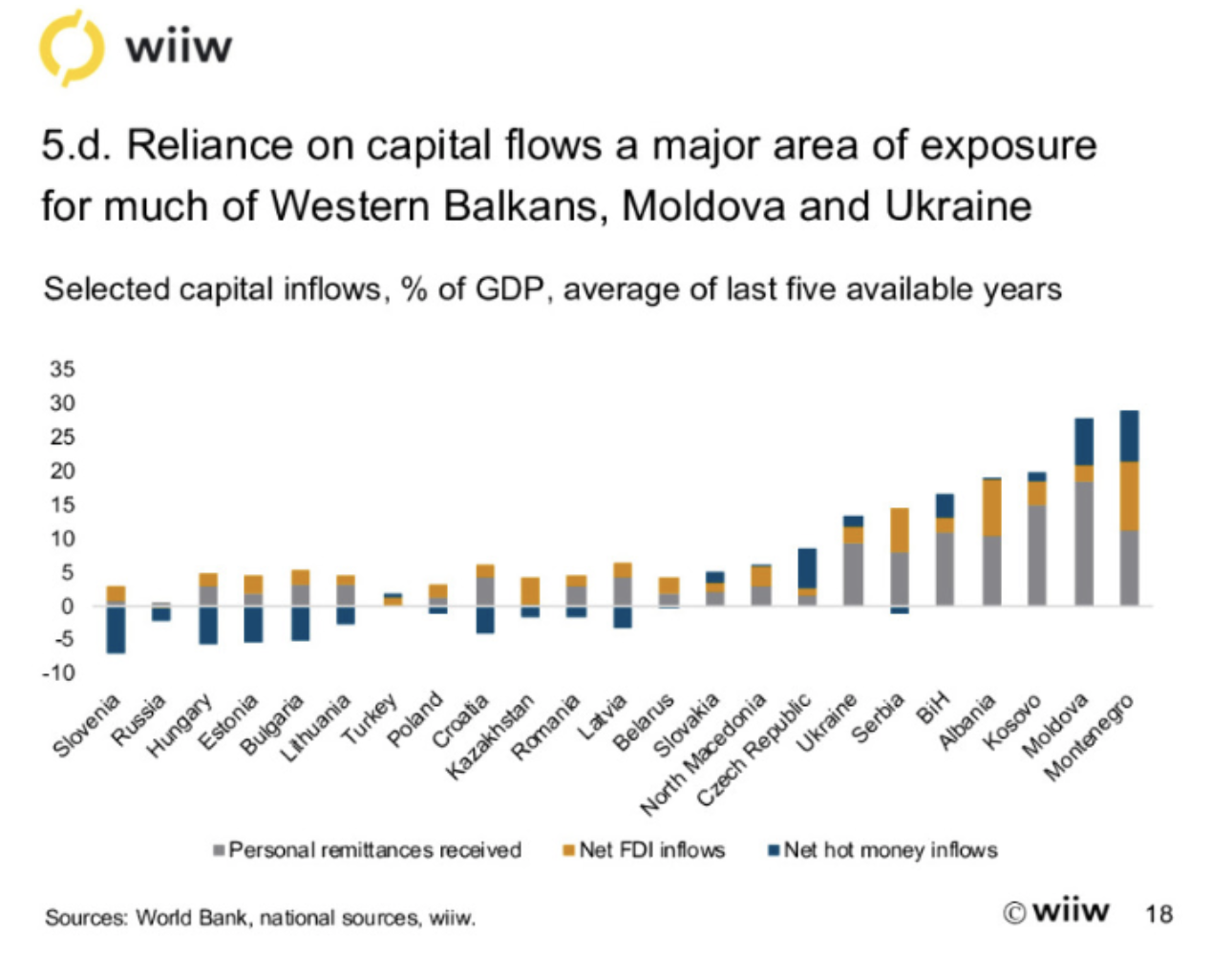 What is more, within the next 10 years, (a) consumer caution may persist even after the crisis, (b) interest rates and levels of inflation could remain lower for a long time, (c) taxes shall probably be raised and might likely become more progressive, (d) the State will play a major role in the economy. A possible outcome of this unpredictable and symmetric “black swan” might entail a disruption and subsequent reshaping of global value chains, thereby (e) favouring near-shoring, services out-sourcing and increasing digitalisation. It is imperative and crucial to tackle the demanding challenge of AI, as labour shortages and automation shall be here to stay and must be confronted or at least better managed. China, regardless of its current responsibilities linked to the epidemic’s spread, will continue to remain a stakeholder in the region and a competitor for the European Union. 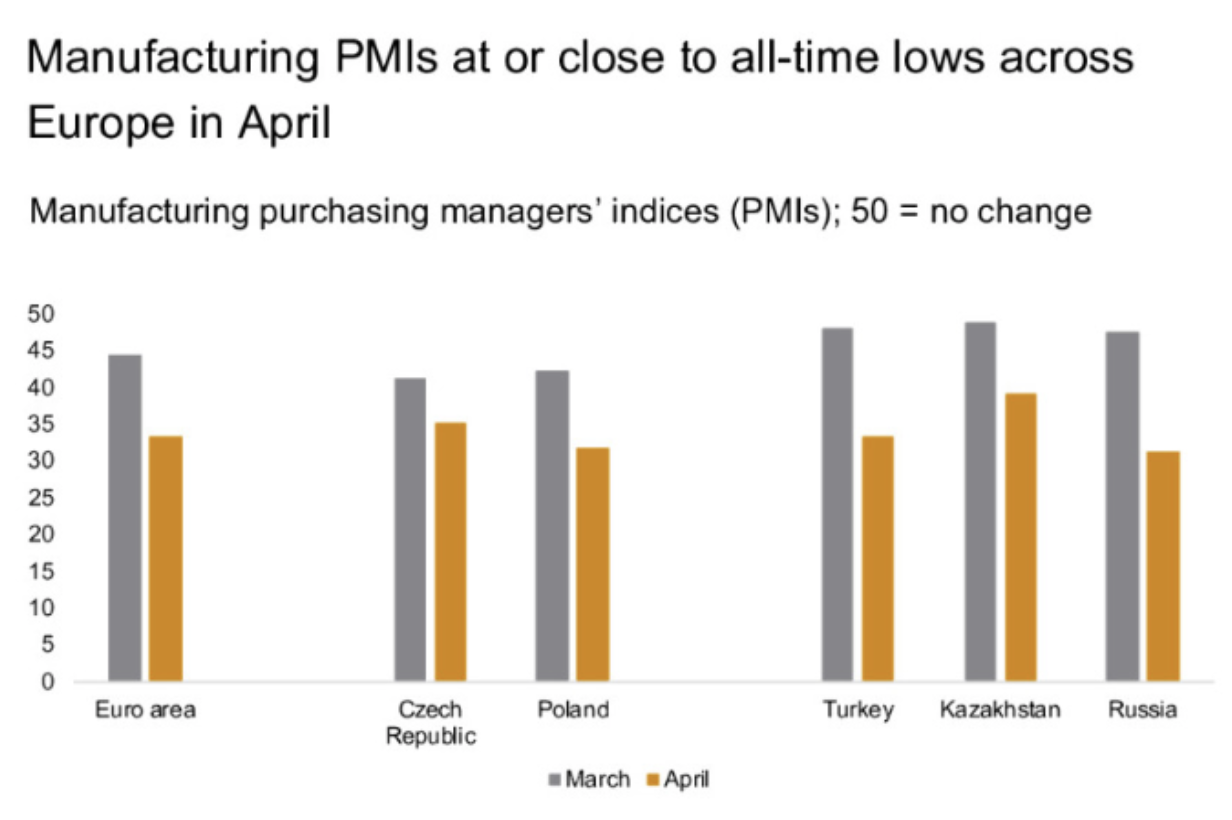 In light of the above-listed strengths, vulnerabilities and threats, the political role of the EU and its capacity to be considered the major partner for these countries, are of the outmost importance and must be supported thoroughly and cautiously. This downturn certainly constitutes a watershed but also a major opportunity for the Union to take the lead and help these nations consolidate their institutions and economies, embracing and further integrating them, with a view to expanding towards the East of Europe and reducing China’s influence in the region, as a consequence.

Would it be possible to have a fully digital art gallery? Back in 2006, Germano Celant, the father of the Italian art movement Arte Povera…