Amidst the unstoppable news wave regarding the Coronavirus pandemic, the gaze of the world has now shifted to some of the major Western democracies. Having been hit the hardest, Italy finds itself at the center of a heated debate in which many are questioning both the government’s ability to enforce new restrictions and the Italian population’s commitment to obey them. Unlike authoritarian regimes such as China, where arresting people for breaking the quarantine isn’t perceived as a violation of citizens’ rights, representative democracies like Italy face a unique challenge in having to reconcile stringent stay-at-home measures with individual liberties. While some openly ask to set aside the latter to tackle the crisis, thus contradicting one of the fundamental precepts of liberal democracy, others call for a more lenient stance. Nevertheless doubts about democracy’s ability to effectively deal with an emergency like the current one are only increasing, even questioning the once almost universally accepted desirability of democracy itself.

International newspapers, including the New York Times and The Guardian, have largely criticized the seemingly irresponsible behavior of the Italians, painting them as reluctant to follow the rules and inclined to bend the law even during the most dire circumstances. 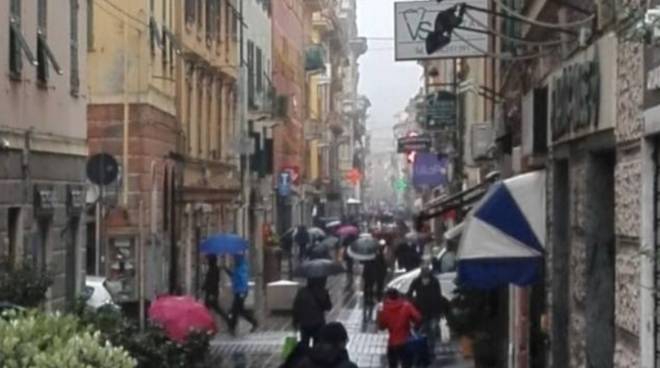 Persons crowding into Via Sestri, one of the main streets in Genoa city center

The Guardian expressly cited national chaos following government directives on March 8, stating that “Italy experienced its highest day-on-day rise in deaths from coronavirus on Sunday and was plunged into chaos after details of a plan to quarantine more than 16 million people were leaked to the press, sending thousands into panic as they tried to flee.” Similarly, the New York Times mentions the initial ambiguity of government directives to deal with the ongoing crisis and the subsequent confusion triggered in the population, citing contradictory measures “from the government and from officials of the northern regions about what people could do and where they could go.”

Images of people ravaging supermarkets, flooding the beaches, queuing at ski lifts, or escaping the quarantine to go on vacation point towards an irresponsible nation that combats fear by drinking aperitifs, oscillating between panic and fatalism, unable to handle a sanitary and soon also an economic crisis that will last for months if not years. 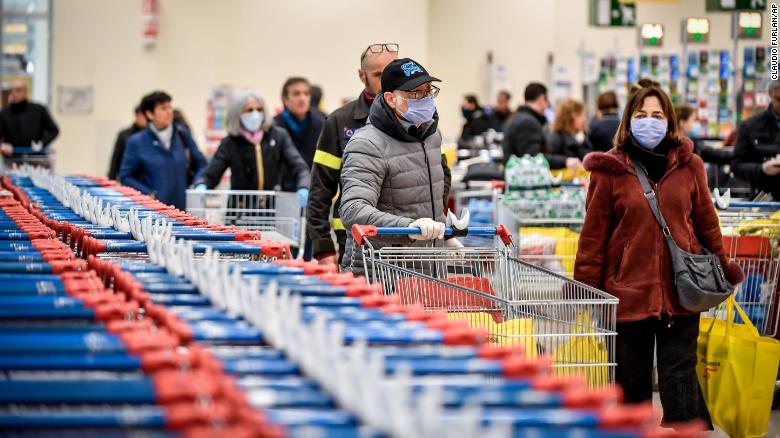 Italians rushing to a supermarket in Milan after the country announced a sweeping national quarantine on 8 March 2020. (Claudio Furlan/LaPresse via AP)
Source: https://edition.cnn.com/2020/03/09/europe/coronavirus-italy-lockdown-intl/index.html

With the World Health Organization’s (WHO) General Director Tedros Adhanom declaring COVID-19 as a pandemic, Italy and other democracies have been called to demonstrate that individual freedom is not in opposition with the upholding of the common good in times of crisis. Now more than ever, citizens are required to channel their patriotism into civic commitment and prove that drastic measures can be taken and respected as effectively in democracies as they are in authoritarian regimes.

It is hard to deny the efficiency of the Chinese response to the crisis, which is already one of the most serious of the 21st century. Unsurprisingly, the People’s Daily, the Chinese Communist Party’s newspaper, has praised the operation of its government, portraying the CCP as the party with the strongest governing capacity in human history. But it’s not only domestic media applauding the country: the WHO itself commended the Chinese model and its rapid response, which has led to the isolation of 60 million people throughout the province of Hubei and its capital Wuhan, the epicenter of the pandemic. By undertaking drastic measures, including the shutdown of all public transportation, forced quarantine for millions of people, the blockage of industrial production, the closing of schools and public offices, and, most importantly, mass surveillance through artificial intelligence, the government has successfully managed to contain the epidemic at the national level. China has once more demonstrated its assertiveness and the power of its regime, and while the cost of these measures has been, is, and will be enormous, it appears to be a necessary and suitable response. However, the Chinese figures are triggering doubts about their trustworthiness, especially in the American intelligence community, which accuses the government of having underestimated the total number of deaths and therefore the real magnitude of the outbreak in the country. The results of a confidential report presented to the White House were published on Bloomberg, which concluded that the numbers presented by China are “intentionally incomplete”. While the two major superpowers accuse each other through rhetoric reminiscent of 1950s McCarthyism, a counterproductive climate of general suspicion arises which still leaves open the question regarding the true danger of the virus. 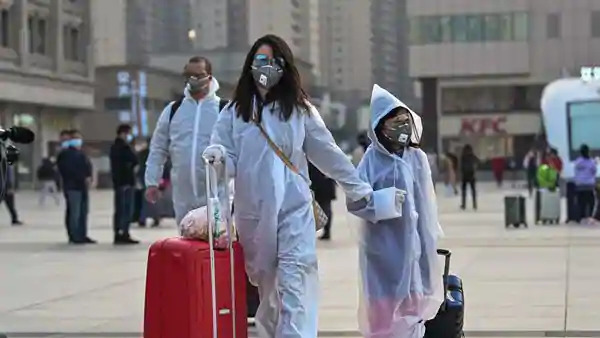 Especially when looking at the rapid and continuous spread of Coronavirus in many democratic countries (Italy, Spain, the UK, and the U.S. come to mind), the idea that authoritarian regimes may be better equipped to protect collective interest in times of emergency sounds more than plausible. Italy’s Coronavirus death toll surpassed China’s one weeks ago, and the situation will only aggravate if the measures imposed in the past weeks will be once again circumvented by the population.

Whether this is the direct result of authoritarianism imposing obedience, or whether it’s due to a cultural system of values in which collective good overcomes individual freedom, remains impossible to say. Either way, one thing certainly stands: civic commitment to respecting rules and guidelines has been key in containment. As the WHO has stated in its WHO-China Joint Mission on Coronavirus Disease report, the strategy’s effectiveness rested on an exceptionally high level of compliance and a broad acceptance of the measures taken. The success of these measures requires not only an unusual decision-making speed on the part of top executives, but, even moreso, society’s full commitment.

The Chinese model surely provides us with some lessons. Citizens’ cooperation is needed, and measures need to be applied with uncompromising rigor. In liberal democracies, widespread lack of trust towards the government and low social cohesion have the potential to undermine even the most concentrated efforts. In any case, respect for the rules should prevail regardless of the political regime. The current crisis however goes beyond the usual discourse about the most virtuous form of political governance, instead inviting all of us to pursue the common good and take responsibility for our actions, as individual choices do not only affect the individual, but society as a whole.

The current measures test our civic commitment and our ability to act for the benefit of the many. This means accepting and respecting rules that temporarily constrain the very freedom that so fundamentally characterizes our political system and culture. The virus is, without a doubt, a fundamental threat to life, but it’s also a major stress test for democracy. Although open societies may struggle to find a balance between their values and an effective response to the crisis, it would be wrong to claim that they are incapable of preventing crises, or that only authoritarian systems are able to deliver efficient results in combating the pandemic. Social cohesion and solidarity, both essential to win this battle, are not in opposition with democracy. On the contrary, they are extremely intertwined with the ideas of inclusivity and participation, upon which the very concept of democracy is grounded. May democratic systems find new strength in these virtues in the struggle against Coronavirus.