On February 23, a 3-minute video with the title “Be A Lady They Said” was published on Instagram and soon after went viral across the web. The clip evokes the everyday contradictions that women are subject to: in their behavior, their appearance, their relationship with men. Whatever they do, women will always be suspected of either “too much” or “not enough”. Taken from a poem by American student Camille Rainville, the text is recited by actress and political activist Cynthia Nixon, and aims to denounce the pervasive toxic rhetoric that women find themselves confronted with.

In the era of #MeToo, we have to face a painful truth: society has been shamelessly and recklessly harming women for generations. Women have been subjugated, suffering from systemic inequalities. This deeply unfair social order was imposed upon them in order to condition their behaviors and their role within society. But how do we explain a situation in which women have become malleable objects, wrought and conditioned by norms that are stifling them? Femininity has been demonized throughout history, creating a deeply unfair social order even today. In the preface of her work “The Laughing Medusa”, Hélène Cixous comments: “These days the air is full of algae, we choke and we don’t laugh much.”

There have been many attempts to determine the origins and nature of fear. Plato and Aristotle primarily understood fear as a physical reaction that relates to concrete objects. Father Augustine saw fear as one of the four main human passions. He distinguished the lowly fear of punishment from the higher-ranked fear of guilt out of reverence for God.

The Danish theologian Søren Kierkegaard viewed existential fear as an essential feature of human thinking and free will. According to Kierkegaard, fear should be overcome in the leap of faith.

For the German philosopher Martin Heidegger (1889-1976), Angst was a basic state of being. Fear results in a state in which existence becomes finite, because man feels existence as “being-toward-death”.

Man has always sought to give shape to his fears to better control them. Fear of the frightening realities which surrounded him, of the forces of nature which he did not understand, but also fear of the dark forces of his internal world, anxiety at the sight of sexuality, destruction, death, otherness.

In psychology, a distinction is made between fear, being a state of mind (state anxiety), and angst, being a behavioral characteristic (trait anxiety). While the state of fear is a temporary emotion due to a real danger, the “trait anxiety” leads to situations that are considered dangerous despite no acute threat.

Fear can be dangerous when it becomes chronic and latent, which leads to a generalized angst. It can even become irrational, which means that the object that is feared has no real traits that makes it dangerous or frightening. The object that is feared is considered as something bad, strange, threatening or dangerous, without rational reasons. When looking back in history, Eve’s original sin, the medieval witch hunts, or Medusa are examples of women having become the object of systemic angst. But is this angst still alive? And what is its heritage in our modern society?

Does angst explain stigmatization and inequalities?

The only reason for a chronic phobia to survive throughout generations is the misconception attached to an object. This brings us to consider that angst could be an explanation for stigmatization, which could, at the end, drive to consistent inequalities.

Is it because of an original myth around women, attributing to them a kind of mystic symbolism, a deformed conception of femininity, that the stereotypes are still harming and weakening women in our society? Is the modern ideal women the result of the unconscious will of men to control the image and the role of women in our society because they are fearing their feminine nature? To sum it up, is the original angst of women the beginning of inequality?

Like a prophecy, angst is following women across time, and the implications of this phobia has proved itself to have enormous repercussions on women’s life, on the organization of society, and on our ways of thinking. It has proven itself to be destructive, in many ways, for women. But where does the paranoia end?

In art and literature, women are often equated with supreme purity, divine beauty, finesse, and so on. At the same time, women are the object of the most monstrous fantasies. Femininity, full of obscure mysteries, frightens. And this obscurity, over the centuries, in painting, sculpture and literature, takes shape through the character of Medusa.

Women have been suffering from an original fear, deeply rooted in Western culture and history. This fear has been continuously transmitted over generations. It has become cultural and it even got institutionalized in our modern societies. A latent anguish has led, over time, to a conditioning of women in our modern society, and this control has led to the development of stereotypes, stigmatizations and inequalities over time. This can be illustrated by the figure of Medusa and its evolution throughout history.

For twenty-seven centuries, Medusa has regularly haunted our imagination with her “eyes that kill”: whoever meets her gaze is immediately and irrevocably made rigid with dread, transformed into stone. Medusa is a complex and paradoxical identity. She’s  object that escapes attention because it cannot be seen. The myths of Medusa confront the “reciprocity of seeing and being seen” with invisibility and blindness. However, denying the presence of Medusa does not prevent her from existing.

Freud illustrates his theory of castration with the image of “The Head of Medusa”. The myth of Medusa is part of the myth of Perseus which tells how, with the help of the gods, a hero dares to face the deadly gaze of Medusa and how he manages, by decapitating the monster, to conquer the face of terror.

In other words, because men failed to face their desires, they decided to hide what fascinated them and hold the object of their fascination as monstrous.

Medusa Mortula, the first representation of Medusa produced by Caravaggio, is certainly the most famous one. The face represented does not offer the characteristics of a female face, but rather of an androgynous one. Through this theme, Caravaggio seems to have made a self-portrait, thus representing his own death. Medusa, by the power of her gaze, petrifies anyone who meets it. The artist eternally freezes the image in oil on leather, making La Méduse a myth that remains anchored in the history of art through the centuries as a monstrous and frightening figure. 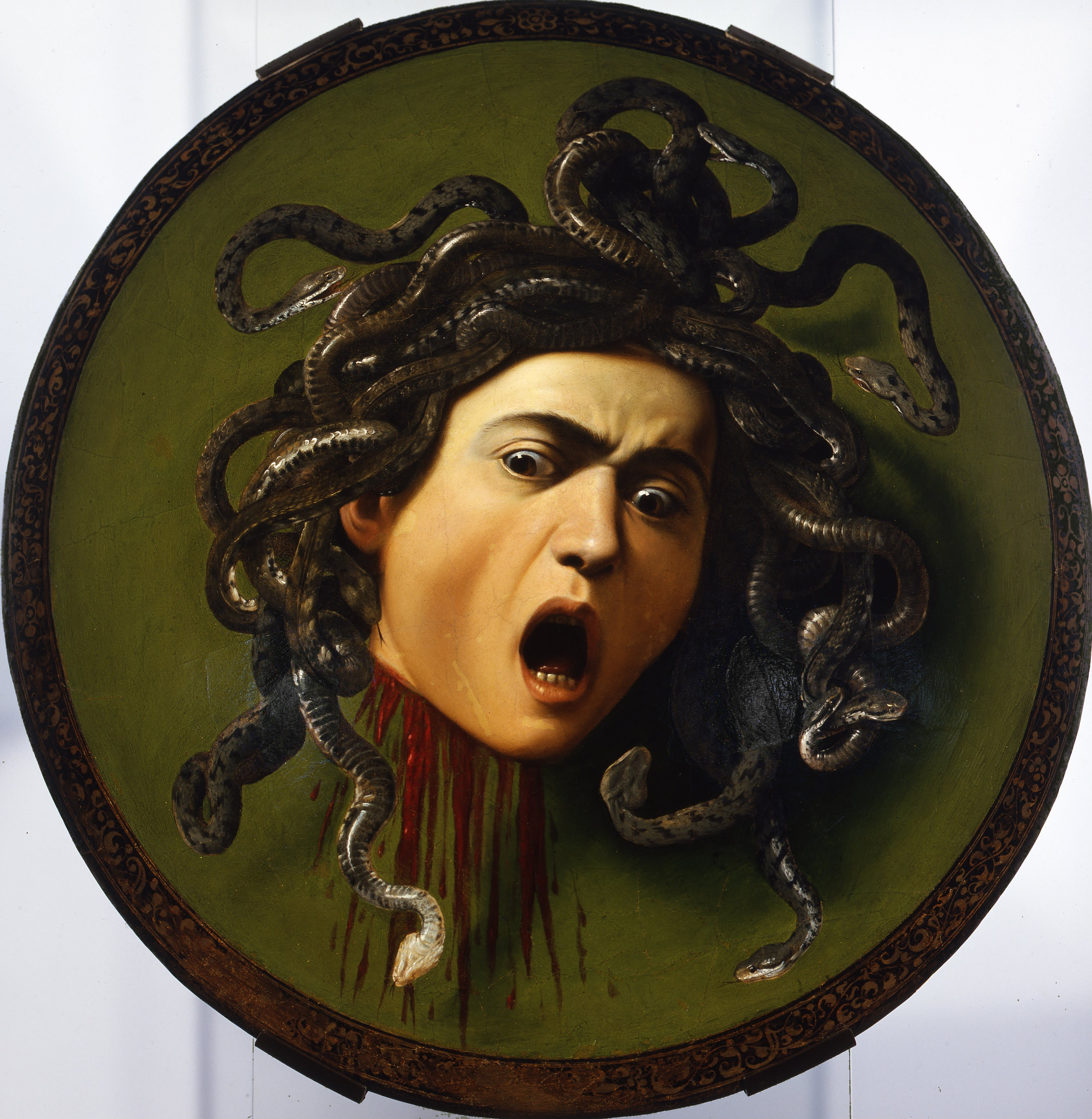 Between demonization and sublimation: the modern Medusa

What does the evolution of Medusa look like in modern societies? The answer is to be found in the heart of 20th century Vienna. 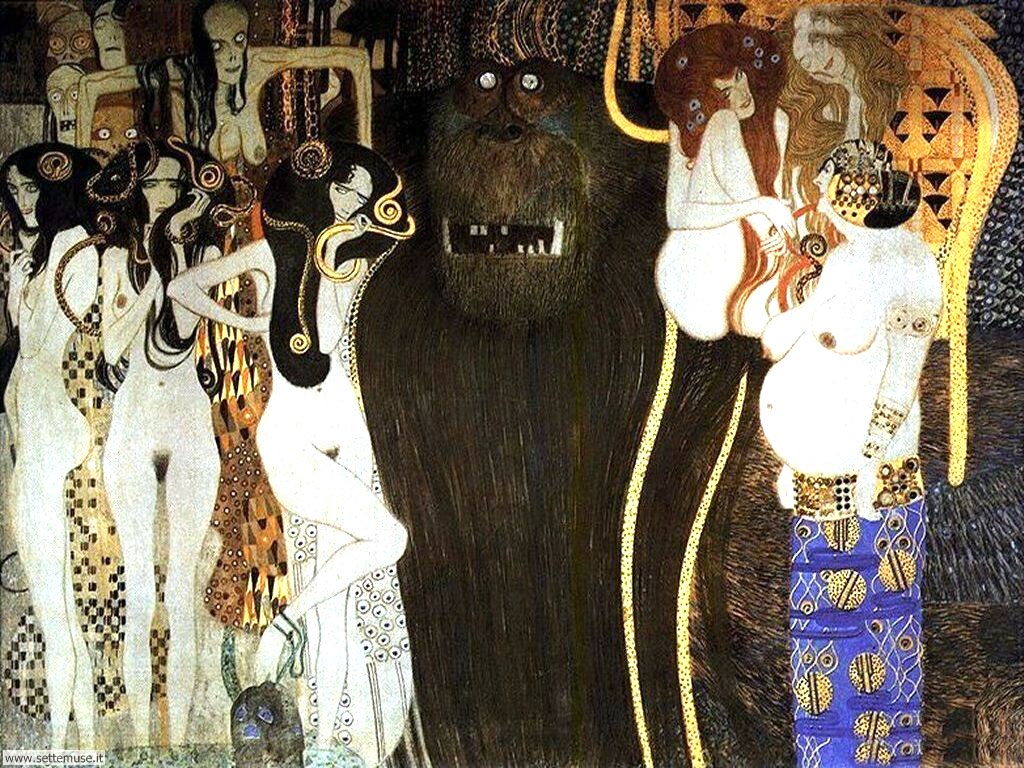 This strange yet captivating picture forms the middle section of the Beethoven Frieze, a grandiose work by early 20th century Viennese painter Gustav Klimt. It depicts the hostile forces on the left, symbolized by the three gorgons, and behind them disease, madness and death. In the center is the giant Typhoeus, their father in the form of a giant monkey, and, finally, on the right we can see three more women, exemplifying voluptuousness, intemperance and immodesty. 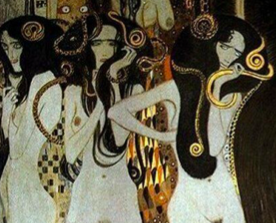 The three sisters are the daughters of Phorcys and Ceto: Stheno, incarnation of social perversion, Euryale, giving life to sexual perversion, and Medusa, personification of vanity. The monstrous deformations of the psyche are due to the perverted forces of the three drives: sociability, sexuality, and spirituality. The monstrosity is magnified by the flamboyant colors and a gold specific to the Viennese painter. The work is actually a tribute to the woman and showcases a feminine representation of an almost divine nature. The Klimtian woman embodies a danger for the virile order.

“[Klimt] surrounded himself with enigmatic nude female creatures. While he was working standing in front of his easel, locked in his silence, they wandered around the workshop, stretched out of all their limbs, lounged and radiated the space of their beauty until late in the day – but always on the lookout for a sign from the master and ready to freeze as soon as he saw a pose or a gesture that challenged his sense of aesthetics and which he wanted to grasp with the stroke of a quick pencil stroke. “

Klimt was Emilie Flöge’s companion. He considered the young woman as his soul mate, a stylist with whom he had an intellectual and aesthetic relationship as equals. However, his affairs with his mistresses and his fascination with the female sex in generalreveal the painter’s complex and often ambiguous relationship with women. Magnified in his paintings, the image of woman represents a real fascination for him, an infinite curiosity which he explores through his work. While the Viennese women hide their bodies in rigid whalebone outfits (chesthigh corsets which compress the waist), the Klimtian woman is draped in rich fabrics, in sumptuous dresses of Byzantine inspiration.

Klimt’s standpoint is ambiguous, and it perfectly illustrates the difficulties men face in understanding femininity. Over time, the distortion between the inherited cultural angst — an angst that conditioning women in their behaviors, their roles in our society, and the codes that have been dictated to them, thus drawing a biased and reductive image of femininity — and the desire of men to understand the feminine nature, leads to a form of paranoia. Because men fail to satisfy their desire to know women better, their fascination became a threat to women throughout history.

A way out of angst?

Cixous is the only one to deny the principle of ontological equality, the utopian horizon line of Simone de Beauvoir’s “The Second Sex”. In the first lines of her work “The Laughing of Medusa”, she writes: “The past must not make the future”. Her aim is to advocate for a liberated, autonomous feminine, distinct from the masculine in her head and in her body, in its relation to the world and to the constraints of sex and gender. She describes a prophecy that women have to anticipate. Cixous posits that “the fact that there is still a present does not prevent the woman from beginning the story of life elsewhere.” Beauvoir defends a “fraternal” relationship between men and women, while Cixous is talking about “the woman in her inevitable struggle with the classic man.”

To be more moderate and update Cixous’ theory, we can consider that the struggle we undeniably observe in our modern societies is the result of a cultural heritage, and that women have to become aware of this historical viewpoint. We are entering a transition era where women are realizing the position that they have been put in, and they are reacting collectively. The Internet era is a revolution in many senses: it gives women one voice to speak out and give a common testimony of what they have been facing throughout generations. During the 45th Cérémonie des Césars in Paris on February 28, Adèle Haenel, a French actress, left the room shouting “What a shame!” as soon as she learned that Roman Polanski, a French film-maker who has repeatedly been accused of rape and sexual assault, won a prize. She has been supported by a reactive and encouraging community on the Internet, showing that prejudices against women have to be taken into consideration, and that it will not be possible to bypass women’s rights any longer.

The sovereign is the one who decides on the exception. Coronavirus is today’s exception. The COVID-19 pandemic which is gripping the world has induced states…