When dealing with the issue of inequality we often approach the problem in the wrong way. We end up discussing about the inequalities as outputs without realizing how the real issue is in the inputs. Just imagine a 100 meters race. No one would say there is a problem if Bolt wins. The problem would arise if, due to any reason, his victory was due to the fact that he started 10 meters in front of the others or before the go of the judge.

This brings us to the concept of relative social mobility. As perfectly stated by the recent Global Social Mobility Report: “The notion of relative social mobility is more closely related to the social and economic status of an individual relative to their parents. In a country with a society with perfect relative mobility, a child born in a low-income family would have as much chance to earn a high income as a child born to parents who earn a high income. Relative social mobility focuses on the social and economic standing of individuals at any one point in time. In economic terms, it is often approximated by looking at the measure of intergenerational income elasticity”

Policies that enhance equality in opportunities can’t usually eradicate the advantage or disadvantage of being born in a specific family, but they can have a great impact in curbing it. Being born in a family that earns 100% more than another can impact 60% of a child’s future earnings in China, 50% in the US while only 15% in Denmark or Finland.

Intergenerational income elasticity and inequalities measured with the Gini coefficient have a positive correlation (known as the Great Gatsby Curve) but with huge variances among countries. For example New Zealand and Italy have the same Gini coefficient, but in the former parent’s income influences much less a child’s future having an intergenerational income elasticity of 0.29 while Italy’s figure is 0,48. 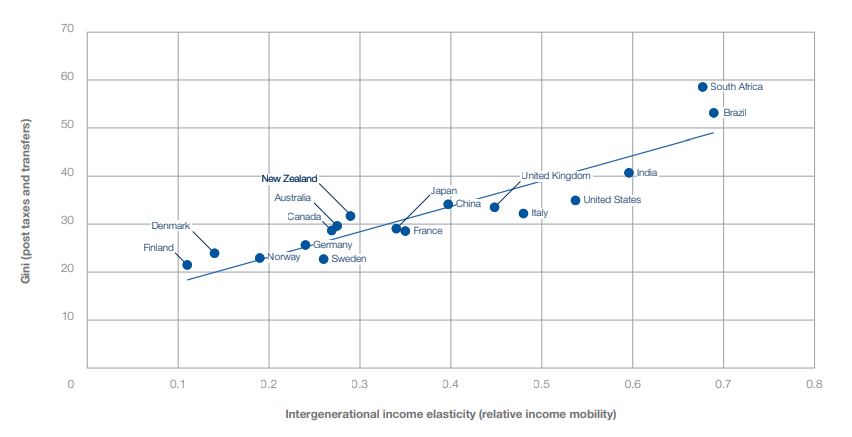 To help countries understand the problem the Social Mobility Index was created. It is an index that focuses on the main drivers of relative social mobility. Improving those drivers could have huge social and economic implications. For example if the countries included in the study were to increase their score by 10 point in 10 years they would se themselves not only with a more cohesive society but with an extra 4.4% growth in gdp.

Let’s take Italy’s case study. With a score of 67.4 Italy ranks 34th in this year’s index loosing 4 positions with respect to last year’s ranking. But this score hides huge opportunities for policy improvements. 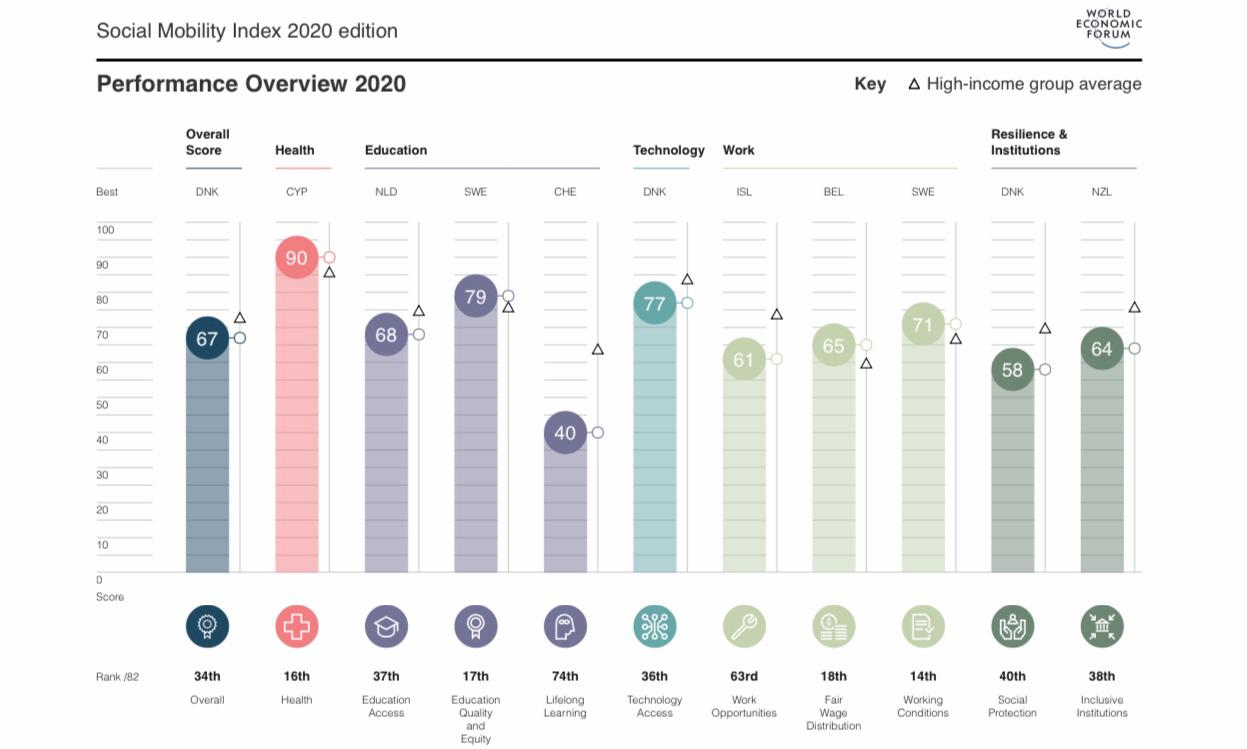 If in general Italy performs well in the health pillar this is not true for all the sub-categories that compose the pillar being 57th out of 82 countries for prevalence of malnourishment (13.1%) among the 5-19 year old population. Even for what concerns education there is a huge variance in the results. On the one hand Italy performs well in the quality of teaching especially for figures such as the number of pupils per teacher in primary school even though this quality is less clear once we consider the outcomes being only 32nd out of 82 countries in the harmonized test score (international measure of education by the world bank). On the other hand its figures worsen for Education access being 56th for NEET ratio. For other pillars instead the outlook is completely negative, such as for the lifelong learning and the working opportunities ones.

A country that doesn’t give the tools to its citizens to face todays challenges and that does not offer enough opportunities for all will inevitably worsen the inequalities that are present in the society rather than narrowing them, ending up in a viscous circle from which it will become more and more difficult to get out.

2020 is off to a bit of a rocky start to put it lightly: from Australia’s environmental disaster to the threat of a global conflict…