Give a man a fish and you feed him for a day; teach a man to fish and he goes into disputed waters and causes an international uproar. Doesn’t sound too familiar? Maybe it should, because that is exactly what happens every so often in the South China Sea. The culprits: mostly Filipino, Indonesian, Vietnamese, and Chinese fishing and coast guard vessels, with the Paracel Islands having become a particular hotspot for skirmishes between China and Vietnam, including at least one incident every year since 2011, the most recent one being in March 2019. While the escalations are usually limited to a few arrests and the occasional capsizing, the issue points to a larger conundrum that’s been on China’s mind as of late: food security.

The term food security does not carry the same implications in China as it does in the West. While the UN’s Food and Agriculture Organization defines it as the supply of “sufficient, safe and nutritious food that meets dietary needs and food preferences for an active and healthy life”, the Chinese government has a simpler approach: food security means grain security. Instead of diversifying dietary needs, the country’s key priority is to fill the bellies of its still-growing population of 1.4 billion. China achieved its target of at least 95% domestically produced grain around 2000, and effectively offset price and supply shocks, such as during the 2008 financial crisis, through proactive policies and heavy subsidies, but new challenges have forced the CCP to rethink its approach to food production. 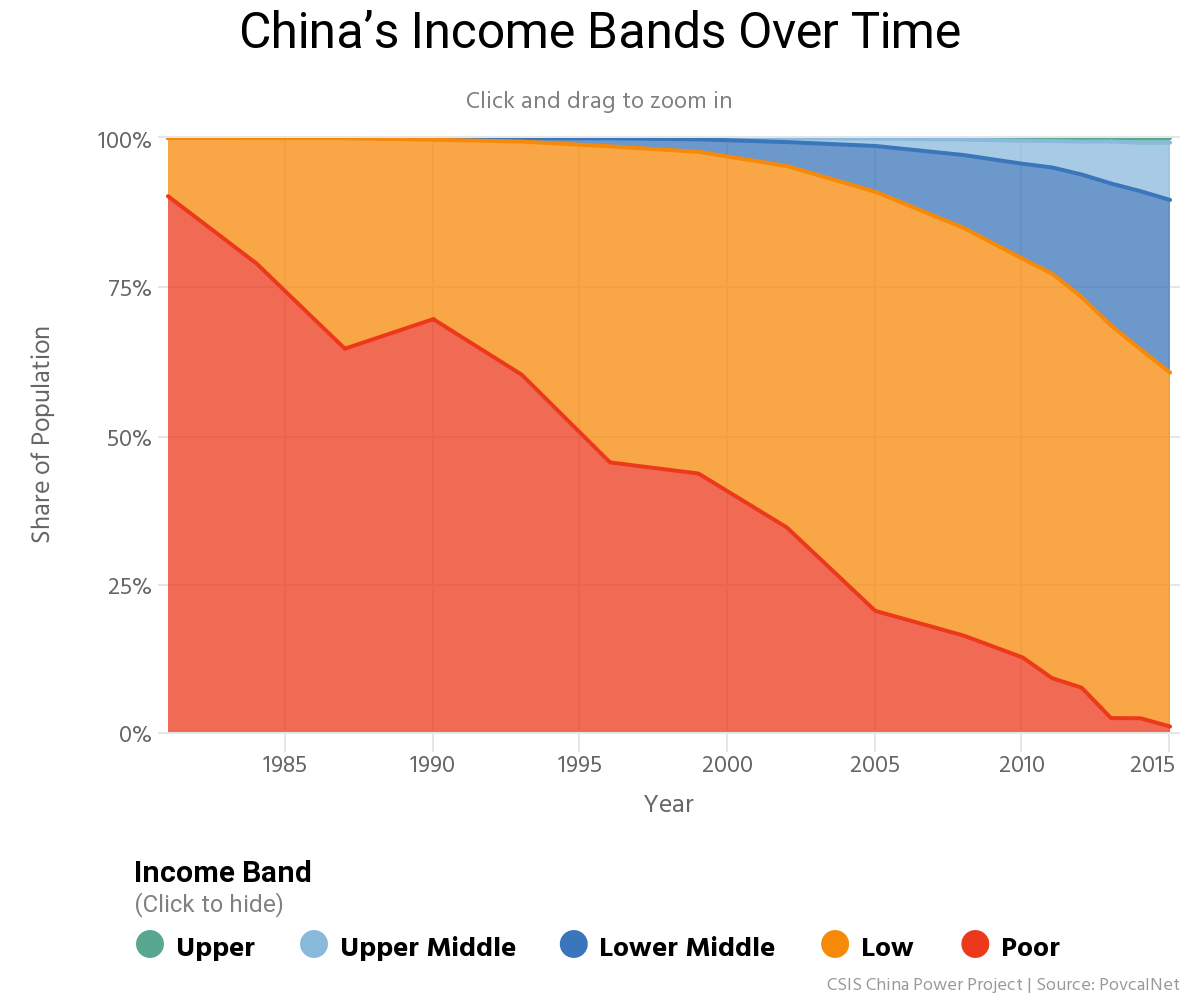 An intense focus on grain production has fostered the overuse of fertilizer, resulting in the depletion of fertile soils and environmental pollution. At the same time, China’s demographics are shifting: while its rural workforce is increasingly overaging, an exploding urban middle class (up from 29 million in 1999 to 531 million in 2013) is beginning to voice its demands, and a diet centered on high-quality protein sources like fish is high up on their menu.

2013 marked a shift in China’s stance. Alongside major land reforms, the central government decided to abandon its rigid goal of grain security in favor of an economically more feasible approach, preferring cheaper imports to large local subsidies, and by 2014 its self-sufficiency rate fell to about 85%. The focus shifted on other produce, bringing us back to the issue of fishing. 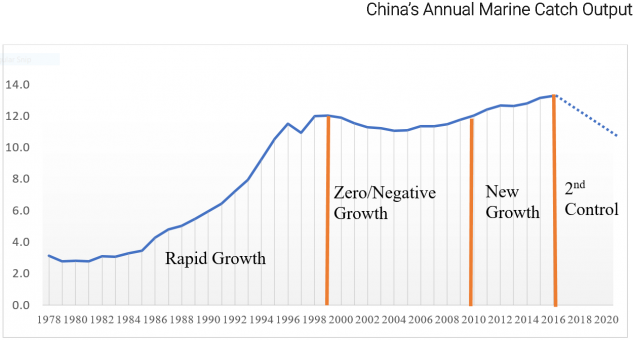 Source: Bureau of Fisheries of the Ministry of Agriculture, China, 2017 | Graph: AsiaGlobal Online, 2018.

Just like most of its agricultural counterparts, the Chinese fishing industry boosted spectacular growth rates in its early years, steadily rising in output from 1978 until the late 1990s. It is only then that officials ordered a scaleback due to massive overfishing, giving marine life an opportunity to replenish. Unfortunately, the strategy didn’t last for long, as domestic demands could cry louder than any environmental economist. By 2011, the industry started growing again, even becoming part of China’s new maritime strategy in 2012, as well as forming a pillar of the Belt and Road Initiative. But with returns much diminished this time around, the second growth period didn’t last long, coming to a halt by 2016 already when production was cut by more than 30% and fuel subsidies for fishermen by more than 40%, making China not only the world’s biggest fish exporter but also one of its largest importers.

While a more sustainable approach seems like a reasonable path to pursue, the changes weren’t only met with enthusiasm: local governments, especially in coastal regions such as Shandong and Jiangsu, oftentimes heavily depend on their maritime industry, and are reluctant to slow down their operations. Rather than only being a question of self-sufficiency, the issue of fishing has elevated the topic of food security to one of economic survival and compliance. It will be interesting to follow how resolutely Xi Jinping’s rising China will tackle the conflicts in its internal hierarchy. Until then, however, every once and again a lone trawler makes its way down to the Paracel Islands, dreaming of the catch of a lifetime.

When you ask to a financial advisor to provide a list of investment options, you should expect to see the usual suspects: bond, stocks, mutual…