As suggested by Pierre Repp, pessimism would be part of the French patrimony.  But how is it possible to measure the cultural dimension of the well-known French epidemic depression, depicted, since decades, as the black sheep in happiness studies? Also, to what extent is this cultural unhappiness contagious?

On January 16, 2019, during his greetings to the press, Jean-Michel Blanquer, the Minister of National Education, portrayed the French population: “It always amazed me, but the French are more pessimistic than the people of Bangladesh …”

This comparison can be held as caricatural, but since decades, researchers agree on the fact that France shows a symptomatic tendency toward cultural pessimism. The Navigator – HSBC Commercial Banking (2018) shows that Bangladesh, with a GDP of 249,7 milliards USD, is at the second rank for firms with a positive outlook on the global trading environment, while France, with a GDP of 2,583 billion USD, is on the sixteenth rank. The French depression proves itself to be an epidemical phenomenon. Restoring France’s hope was the great political project of Emmanuel Macron. It was also the incipit of his campaign book, Revolution. A wind of improbable optimism among the French population showed that it had worked, at least during his campaign.

Alas, the wind has turned, and even the Macronisme failed to spread hope among the French population. We could ironically launch a very Macronian “France is back!”: as a matter of fact, the French pessimism is not new. Survey after survey, invariably, France has been figuring in the depths of international rankings for three decades at least.

Is the chronical unhappiness symptomatic of a cultural depression? Violence in the context of the movement of Gilets Jaunes (“yellow vests”), as well as turbulent context of the current demonstrations for the national strikes are mirroring the growing anger and also confirming the tendency for a constant dissatisfaction among the population.

It seems that the French depression affects the immigrant population living in France. Socialization instances would be the first vectors of transmission for the culture of pessimism. At least, cultural determinants of happiness have a direct impact on the self-declared happiness, even among immigrants.

Explaining the myth of the French dystopia

Today, many countries are setting themselves in order to measure the well-being “beyond the GDP”, following the recommendations of the report Rapport Stiglitz-Sen-Fitoussi (2009). The INSEE published the result of a survey, Satisfaction globale de la vie (2018), comparing the happiness level on an international level: on a happiness scale ranging from 0 to 10. 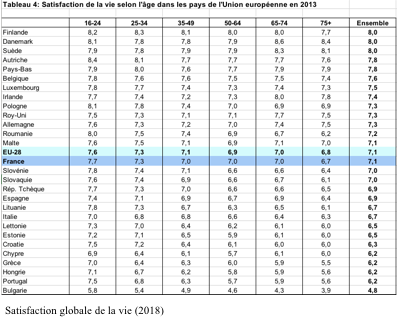 The French are placed on average at 7.1, equaling the global rate of the European Union. This score is surprisingly low, knowing that the Frances’s GDP per capita is high in comparison with other European states, with 41 463,6 in 2018, just after Finland (49 648,1). With a comparable GDP per capita, Finland is ranked with the highest level of life satisfaction in the European Union, with a grade of 8.0. Romania, with a GDP per capita of 12 301,2, and Poland, with 15 424,0 -way under the French GDP per Capita-, have a higher happiness level than France, with respectively 7.2 and 7.3 of life satisfaction.

Also, it appears that the French feel much less happy than predicted by their Human Development Index (HDI), which takes into account not only per capita income, but also education and life expectancy at birth. Frances HDI is 0.901 and the reported happiness level is 7.1. With a comparable HDI (0.904), Luxembourg is at 7.5. The Danes, with a HDI of 0.929, are at 8.0, the highest level in Europe. Living in France reduces by 20% the probability of declaring oneself very happy, that is to say above the seventh step, and that for as long as the statistics are available (that is to say since the 1970s).

The French pessimism and its influence among immigrants

In general, the level of well-being declared by European emigrants is correlated with the average level of their compatriots remaining in the country, a proof of the cultural dimension of well-being. The World Happiness Report (2018) gives a cross-country analysis of the happiness among the immigrant population. Here, the goal is to measure and compare the happiness level of immigrants and the locally born populations. 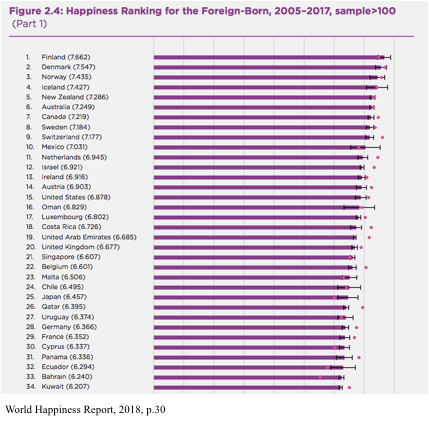 Of course, objective determinants of happiness such as high unemployment, inequality, insecurity, immigration, pollution, or even the weather are feeding the French depression. But if subjective well-being is to be an objective of public policy, it is important to recognize the role cultural provisions play for the happiness level, the important international differences that exist in this area, and the particular role of socialization instances, which seem to be the first vectors of cultural unhappiness and which play an important role in the variations of the level of self-declared happiness.

It is important to note how France is not an isolated case: other European countries are affected by cultural factors and declare themselves less happy than they should be considering the objective determinants of happiness. The French had, since decades, the image of a pessimistic population, but France shares this dissatisfaction with some of its neighbors (with Germany, with certain Southern European countries as Italy or Portugal, and even more with Central and Eastern Europe). In contrast, Denmark and other Scandinavian countries, Switzerland and Ireland remain at the top of all rankings in terms of well-being and satisfaction.

The tendency towards pessimism among some wealthy countries seems to show an empirical evidence illustrating the Easterling paradox: within a country, the average welfare rises with national income only until a certain point of development. Average life satisfaction scores closely track GDP growth over the first decade of the transition process until the regime stabilizes. Then, after this period of development, the life satisfaction tends to stabilize. But developed countries don’t follow this relation to the same extent: the differences in self-declared happiness between wealthy countries remain unexplained. In order to explain the sources of subjective appreciations of well-being, the field of happiness studies deserves to be more broadly explored with respect to the cultural factors that are determining the differences in self-declared happiness.

Students and researchers of the Team Neos collaborate to write the book: Jobs Act. The job market two years later. The inaugural presentation of the…