DISCLAIMER: Considering the fluidity and heterogeneity of the movements that were birthed from an initially united demand over the withdrawal of an extradition bill this June, my personal experiences of the protests do not and can not do justice to the kaleidoscope of protestors – many of them in their early 20s and younger – and their lived experiences of the #FreeHongKong movement that swept the city of around 7.5 million. This provides a more personal account of the Hong Kong protests this summer, infused with political ruminations along the way. Too many political commentaries that lack personal appeal have been produced, thus I am sceptical of contributing to this growing repertoire.

I was born in Hong Kong in 1998 – a year after the handover from Britain to China – and lived 18 years in what others dub the “vertical city” before I left for university abroad. Because of the eclectic mix of cultures, languages, and experiences that Hong Kong offers, its identity has always been a shifting shadow that fell somewhere between its British colonial past and its current status as a Special Administrative Region of China. Until this summer, that is.

Protests start with an identifiable purpose, one that is salient enough to unite people from all kinds of different backgrounds and walks of life to fight together for a common cause. Plenty of literature is devoted to the anatomy of protests, the psychology of protestors, the crowd mentality, and the behavioural changes that occur as one shifts their identity from an individual to a collective perspective. The extradition bill was the unifying reference point that rallied people to the streets, tapping into the average Hong Konger’s fear that, should it be put into effect, the city would become just another Chinese city, rendering “One Country, Two Systems” – a novel governance structure negotiated between the British and the Chinese before the Handover – null.

I worked as an intern at the Hong Kong Monetary Authority over the summer. Despite it being a governmental institution, most of my colleagues were young and relatively supportive of the protest. Rather than being a taboo topic given its controversiality, it was an oft-discussed issue during lunchtimes and breaks. On June 12th, the Pro-Democratic coalition called for a city-wide strike. I called in sick to work and went to the protest site in Tamar Park, close to the government headquarters – a mere 15-minute walk from the International Financial Centre. The protestors had taken over one of the main roads and masks were handed out to interested passers-by. A sea of white shirts flooded the area, stretching along the roads and pedestrian walkways. The atmosphere was peaceful yet charged with anticipation. Unifying slogans that demanded the withdrawal of the bill were shouted; supplies were handed around; water and snacks were offered.

I messaged my supervisor at HKMA where I was – and given the elevation of our office over the city, she took a photo from her desk and sent it to me. It was a strange feeling, to be both on the ground and yet witness a live update of what the protests looked like from a bird’s-eye view. It was also oddly encouraging to have my supervisor be supportive of my excused absence from work, in order to take part in a movement for our city that extended beyond our immediate respective responsibilities. 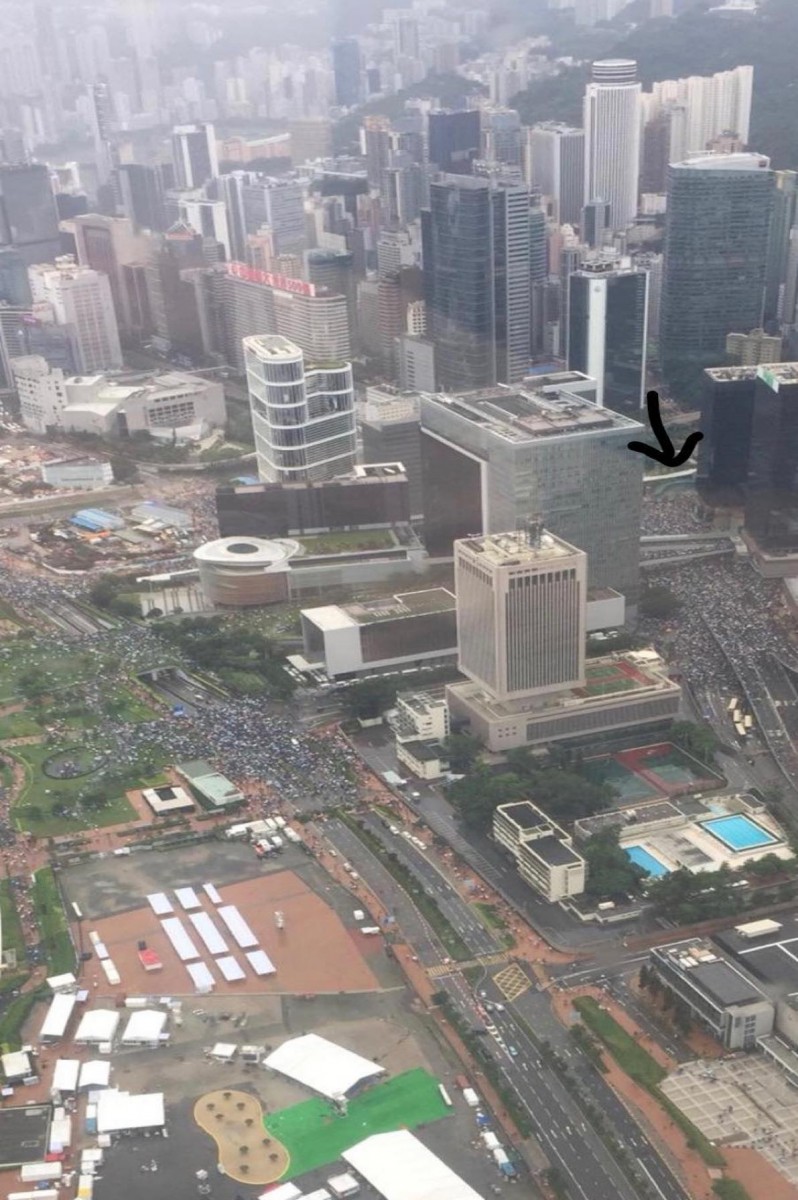 The photo taken by my supervisor on June 12th at 12:30pm of the protest site.

Eventually, my friend and I decided to return home at around 2 pm to get some rest. Approximately 10 minutes after I got on the MTR, I received Telegram updates from the underground news channels that the police had started using tear gas and batons to evacuate the peaceful protestors. Smoke-filled images and chaotic pictures from the scene flooded the news shortly. It was merely the beginning of the weeks of unrest that ensued.

I attended several more protests over the summer before I left for university. During the protest that saw a 2-million record turnout – more than a quarter of HK’s population – I recall masses of sweaty black-clad people moving solemnly through the streets, placards filled with demands and hopes for a better future, people of different ages gathering to stride down the prescribed roads despite the sweltering summer heat. The determination in the crowd was palpable, the power of civil society a tangible reality one can almost reach out to touch. 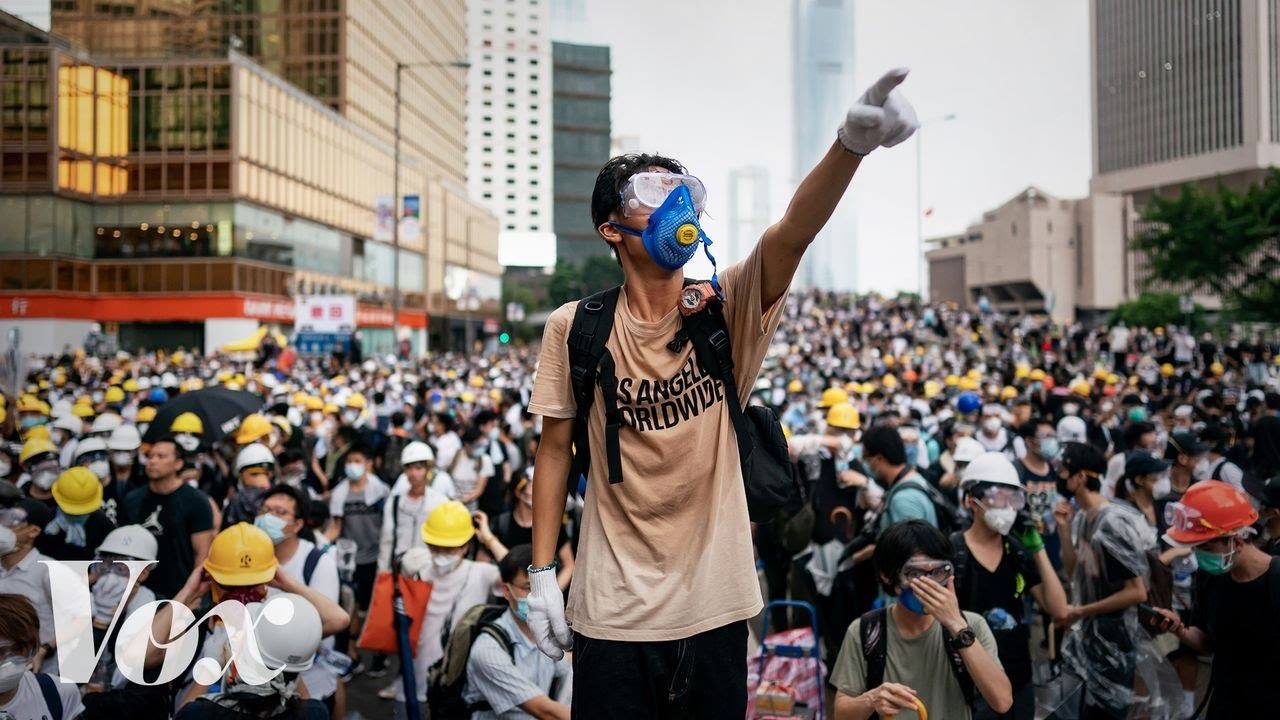 “A protestor on the streets of Admiralty outside the government headquarters in June.”  Taken from CNN, June 15th, 2019

What emerged from the crowd was a sense of solidarity that bound the generations together. Hong Kong, in an arguably “post-colonial” limbo, is facing an unprecedented identity crisis rooted in its historical, economic and political past and present. With the recent enactment of the anti-mask law triggered by the executive’s use of the Emergency Regulations, the shooting of a 14-year old boy during a scuffle, and the Education Bureau’s calls to give unofficial reports of the schoolchildren who wear masks to school, the plethora of incidents do not seem to point towards a propitious outcome in Hong Kong’s socio-political near future, nor to a speedy healing of societal scars wrought by well-documented cases of institutionalized police brutality this summer.

The vaguely optimistic outcome forged out of the protests is the rise of a new generation of youth – one may call the “Generation HK” – who has found its political awakening in the aftermath of the 2014 Umbrella Revolution and eventually on the very same streets this summer. It is an equally heart-wrenching outcome, however, when a generation of middle-schoolers as young as 12 years old are arrested by the police for participating in protests, or simply wandering near protest sites. 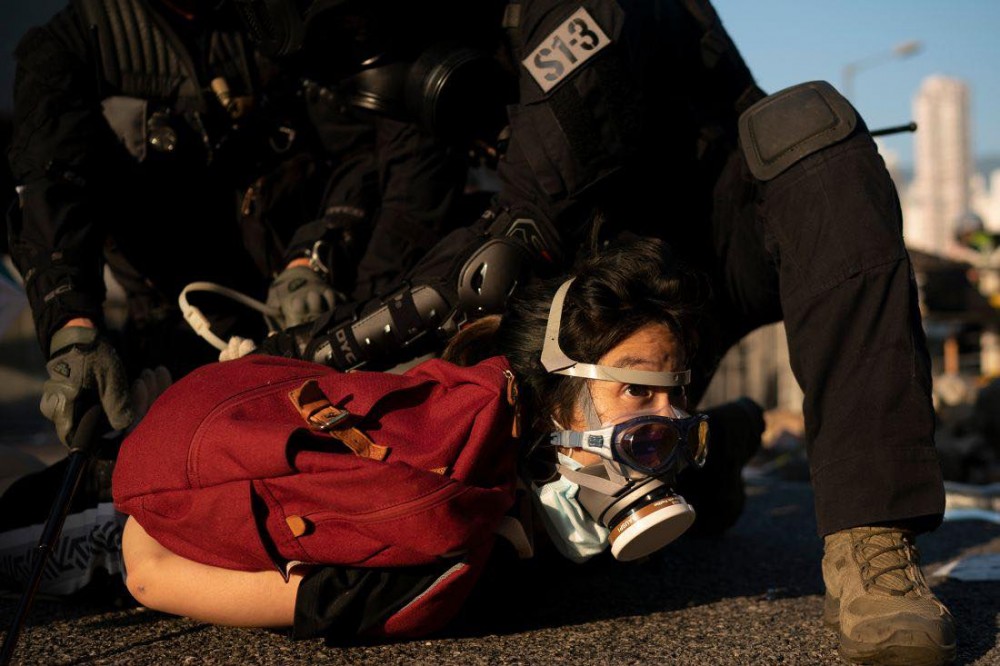 A young woman is arrested during the protests of Saturday October 5th
Taken from CNN, October 6th, 2019

Constantly referred to as the future pillars of society by our government, this generation – mostly born after the Handover – does not remember the colonial period nor fully accept the present stronghold of Beijing in our city’s governance. Alas, in making sense of a confusing present, it is determined to forge its future and identity along the way. Why, one may ask? The year 2047 marks the definitive end of “One Country, Two Systems”, and, by extension, Hong Kong’s autonomy and special status. In other words, the rights and freedoms we possess will eventually be rescinded anyway. Yet, remaining hopeless and passive in the present implies a premature capitulation that will undo everything we have achieved.

Indeed, this is not intended to be a rosy portrayal of how a strengthened collective identity will lead to transformative political outcomes; nor does it justify the use of violent methods by a small minority – what I am trying to point out is that these protests have reinforced something intangible and yet much more valuable.

If Hong Kong’s citizens continue to weather the erosion of their city’s rule of law and basic freedoms in the face of authoritarianism as they have in the last few months, I can only fathom that Generation HK will grow even more relentless. With haunting pictures of mask-bearing citizens filling the streets in Hong Kong in defiance of the anti-mask law and its government, one must understand that Hong Kongers do not easily give in. 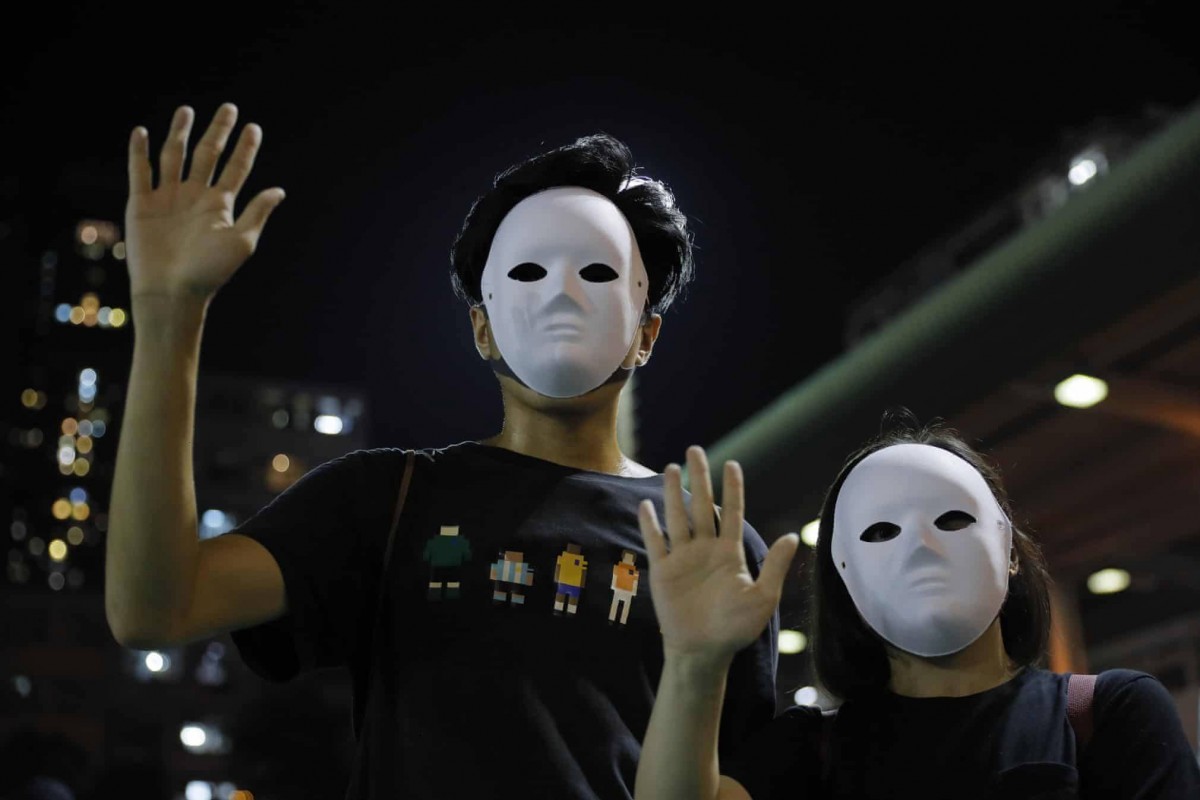 “Masked protestors hold up their hands to represent their five demands during Saturday’s rallies in Hong Kong”. Taken on October 7th, 2019, The Guardian, Kin Cheung / AP

Five demands, nothing less. Over the past 19 weeks of protests, this has been a consistent mantra among protestors. It is clear that Hong Kongers on both sides of the frontlines need closure – one that is done sincerely and properly. Otherwise, the reconciliation the government speaks of will be mere words in the wind and the protests will continue unabatedly, and unapologetically.

As the world watches on – the protestors, armed with masks and last letters (遺書) written for their loved ones, continue to fight at the front lines for Hong Kong’s future. The unifying slogan “光復香港，時代革命!” / “Liberate Hong Kong, Revolution of Our Times” may not be penned in future history textbooks, but it will certainly be etched in the consciousness of many Hong Kongers and those touched by the movement in the years to come.

Abstract The sovereign debt crisis that plagued the European Union seems like an old memory in the collective imagination. However it is not long time…