You might consider this question a tad too colloquial, but I’m genuinely posing it at face value: what exactly is “the news”?

According to the Collins Dictionary, news is “information about a recently changed situation or a recent event”. Otherwise put: it is a summary of what currently happens around the globe, cut down to bite-sized pieces of information so that anyone can get the bigger picture – at least that’s what it’s supposed to be.

News is the mayfly among the media world: it rarely lasts longer than a day before it needs to make space for the next one. What we often forget however is that most “news” is news only to those uninitiated with the topic, and that they rarely are as breaking as they sometimes seem to be. For example, the Arab Spring wasn’t an event that just happened overnight, but instead it was a network of coordinated revolts occurring in a multitude of countries. Similarly, the fall of the Berlin Wall, albeit an immensely important historical moment, ultimately was just the pinnacle of nothing less but the collapse of the Eastern bloc – a process which evolved and slowly snowballed over the years.

In a similar manner, this article is about a piece of news that isn’t really news yet – something that is coming up quite soon, but not soon enough to make headlines for now. Give it about a month and it most certainly will. What I’m talking about is the Bougainville independence referendum.

You might have never heard of Bougainville. Neither have I before I stumbled upon the issue. It’s not exactly a prominent place, but that might just change completely come December. For context: Bougainville is an archipelago in Melanesia that geographically forms part of the Solomon Islands (which it borders to the east), but politically belongs to Papua New Guinea (its neighbor to the west). Nestled in between these two independent states, Bougainville is currently an autonomous region of Papua New Guinea (PNG), but strives to be fully sovereign itself. As of the 2011 census, the population of Bougainville sits at around 250.000, which would make it the seventh-most populous country in Oceania. 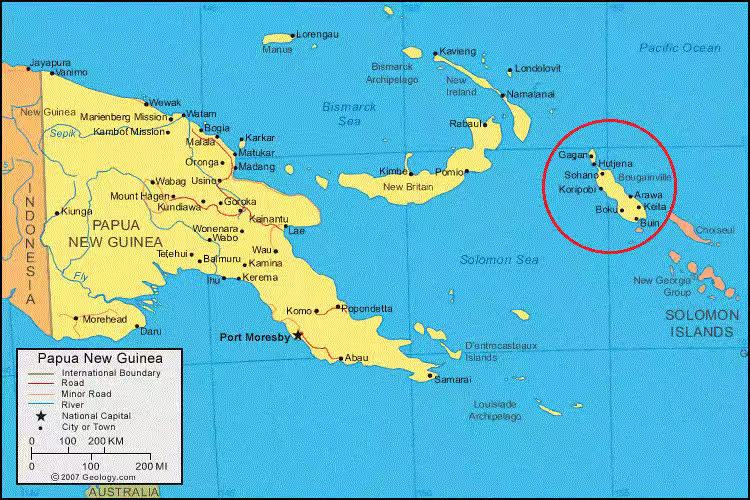 The two main islands of Bougainville, with PNG to the east and the Solomon Islands to the west. © Geology.com 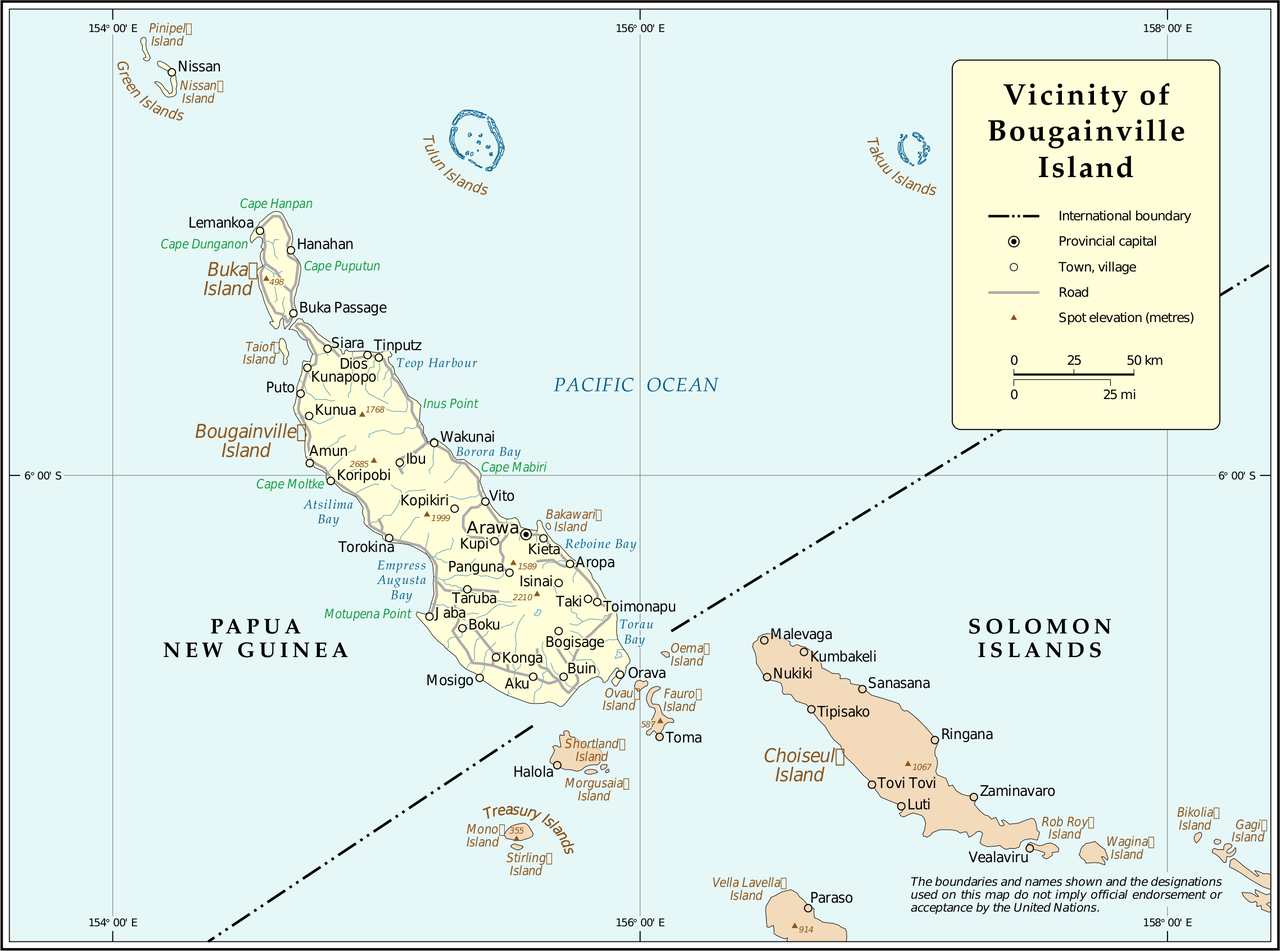 Aside from Bougainville and Buka Island, the autonomous region also contains the Green, Tulun, and Takuu Islands. © United Nations

Bougainville has a storied history dating back more than 30.000 years, but has only started to rouse international attention in the late 18th century, when French explorer Louis Antoine de Bougainville (hence the name) conducted his voyages in the region. In 1885 it became a German protectorate, was then transferred to Australia during WW1, became a League of Nations protectorate thereafter, was invaded by the Japanese during WW2, conquered by the Americans, and finally handed back to Australia in 1945 before Papua New Guinea achieved independence and incorporated it into its territory in 1975. It was also in the 70s that mining began, as Bougainville proved to be rich in both copper and gold. As a consequence, Anglo-Australian mining giant Rio Tinto founded Bougainville Copper Limited (BLC) as a local subsidiary to reap the rewards of the island’s resource wealth. It was said economic exploitation however that spurred antagonism between the locals and the colonizers over how to share in the spoils, prompting a first Bougainville independence declaration on September 1, 1975, just two weeks before the island was handed over to a newly independent PNG.

While this first declaration had no real effect, nationalist sentiment only heightened over time as Bougainville transformed into one of the wealthiest regions in the country. With the mine becoming the single most important economic asset in all of PNG, Bougainville’s natives felt burdened by the need to pay tribute to its colonial overseer. As a result, tensions steadily increased, and in 1988 the conflict turned violent, marking the onset of the Bougainville Civil War between the central PNG government and the island. With more than 15.000 dead, the war has become the largest conflict in Oceania since WW2. After ten gruelling years of warfare, a ceasefire was reached in 1998 and eventually a peace agreement in 2001. Finally, 2005 marked the creation of the Autonomous Region of Bougainville, also setting the date for a referendum between 2015 and 2020, and bringing us to where we are today. 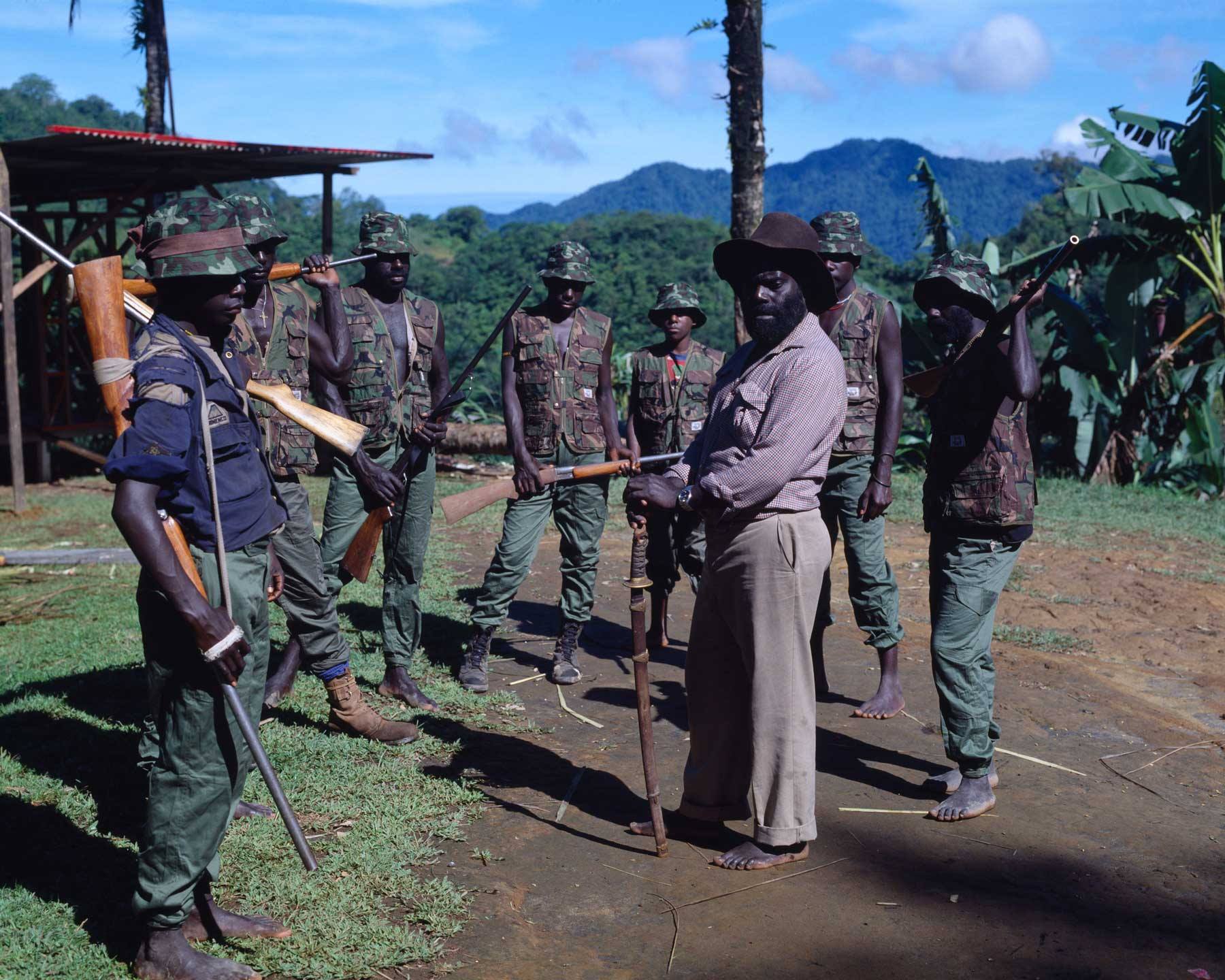 The referendum could be an important step in moving away from the region’s troubled past. © Ben Bohane/Wakaphotos.com

It seems like an independence referendum is the only way forward to secure long-term stability in the region, and sure enough a large majority of the Bougainville electorate is expected to vote for sovereignty. But even so, doubts about the process remain. Firstly, there is the issue of delays. The referendum was originally supposed to take place in June, but got pushed back to October due to funding issues, and then once more to November to ensure that voter registration will be maximized. As of early October, the referendum is set to take place between November 23 and December 7, with results expected by December 20. Whether this supposedly final fixture will truly be the end of the line is anyone’s guess. Legally, PNG has until June 2020 to hold the vote, so another delay is not totally out of the question given the right pretext. The bigger issue however is that of enforcement. PNG agreed to holding the referendum, and it is also aware that Bougainville will most likely prefer independence over increased autonomy (the two options on the ballot), but that doesn’t guarantee that the transition to sovereignty will proceed smoothly. While granting Bougainville the independence that they have bloodily fought for seems like the most sensible approach, it is asking PNG to do something which has rarely been achieved before in history: a country peacefully giving up some of its hard power.

The aforementioned fall of the Berlin Wall or the Iranian Revolution come to mind as successful cases, but aside from a handful of carefully picked examples, threats to the integrity of the state were rarely tolerated on the side of the outgoing government. The disruptive methods available to PNG are numerous, and could range from declaring the elections fraudulous to refusing to ratify the referendum in parliament, or even to establishing an unambitious independence timetable that stretches out over many years with no clear goalposts.

Generally however, it is expected that the PNG government is going to give in to the referendum’s demands, thus helping to establish the first newly independent state since South Sudan in 2011, and the newest addition to Oceania since East Timor in 2002. A big contributor to this cause might turn out to be the government change earlier this year, when in May then-PM Peter O’Neill stepped down and was replaced by his former finance minister James Marape. While O’Neill was a staunch opponent of Bougainville independence, Marape vowed to respect the results of the vote.

But even once Bougainville might be granted independence, the end is nowhere in sight: diplomatic relations with other states will have to be established, new agreements will have to be reached, and the national economy will have to be diversified away from its reliance on natural resources. And then of course there’s still the Faustian bargain of how to deal with the mines, the proper resolution of which will most likely take years if not decades.

Nobody said independence was easy, but foreign policy analysts cannot help but wonder if Bougainville is quite ready yet for what could lie ahead of it. For all we know, however, for once it might just be in the hands of its very own people.