Amid a full-blown trade war with the USA, a faltering economy and further potentially explosive protests in Hong Kong, Beijing is bracing for the country’s 70th anniversary.

October 1st marks the anniversary of the founding of the People’s Republic of China proclaimed by Mao Zedong in 1949 from atop Tiananmen Square. This year, the ruling Communist Party flexes its muscles with extravagant parades aimed at showcasing the army’s strengths, at a moment when its economic growth is slackening to an all-time low since 1992.

The event does not only represent the bombastic celebration of the symbolic anniversary of the founding of the People’s Republic of China, it stands as much as a priceless opportunity for the ruling Communist Party to reaffirm a common identity in a period of diplomatic and economic tensions with the USA: “Let patriotism become every Chinese person’s firm belief and spiritual sustenance” evocatively reads one recurrent banner in the city.

This year’s anniversary is warmly cherished by the party leaders: the PRC has outlived the Soviet Union, which “only” endured 69 years. The grand parade planned for October 1st is as much the occasion for the party to display its military strength in the face of its contenders as to boost its international aura. The People’s Liberation Army (PLA) general Chief, Gen Cai Zhijun, declared in a recent press conference that the PLA “will showcase advanced weapons for the first time”. Rehearsal parades during those past weeks revealed some of the cutting-edge aircrafts including China’s latest drones, intercontinental ballistic missiles and fighter jets. 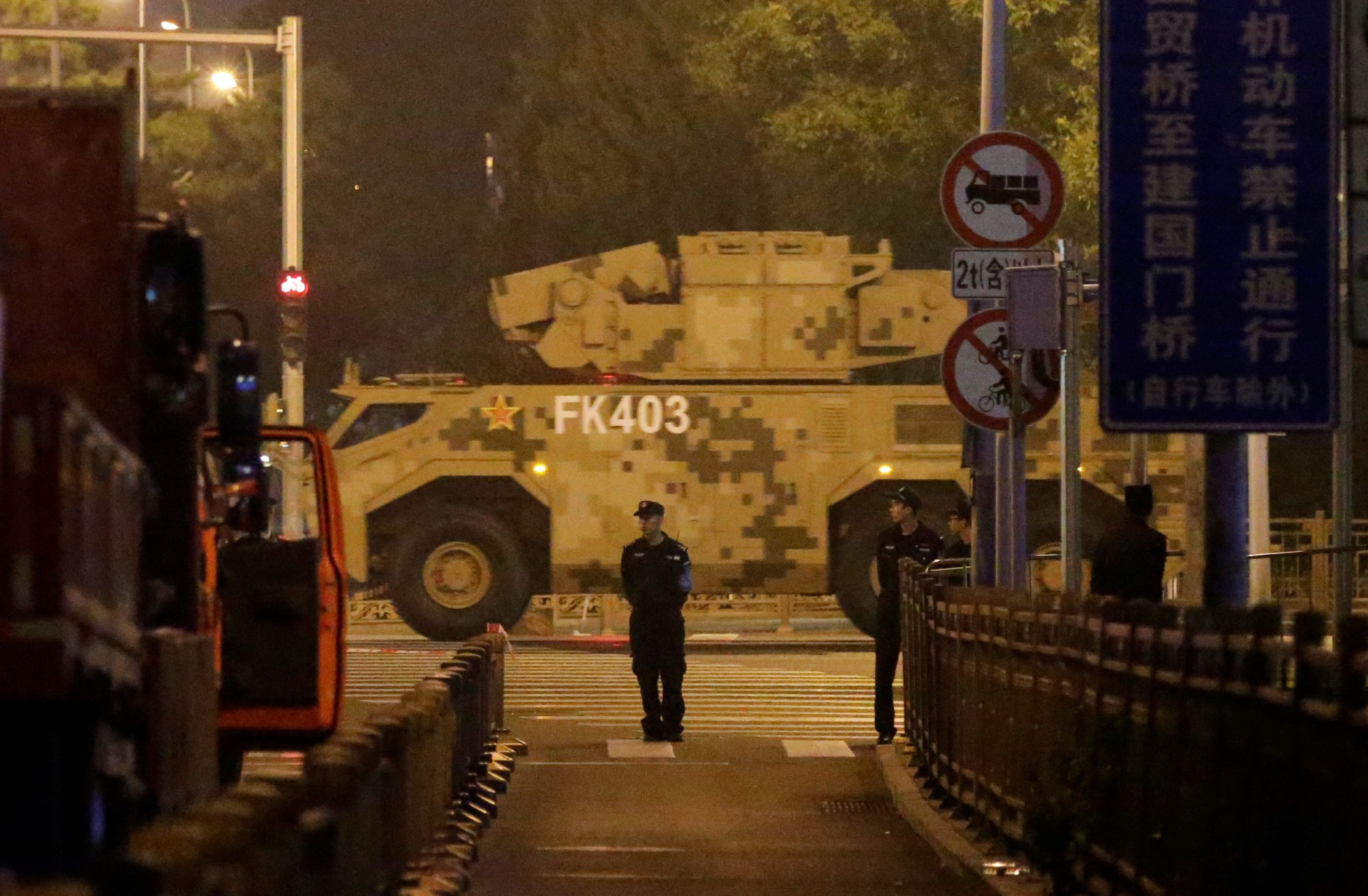 A military vehicle passes along a street as streets in central Beijing were closed off for a rehearsal of the military parade on October 1 to mark the 70th anniversary of the founding of the People’s Republic of China, in Beijing, China September 21, 2019. REUTERS/Stringer

Ahead of the 70th anniversary is set to be inaugurated the capital’s newest transportation hub: Beijing Daxing International airport. “A gift to the Chinese people” according to a student in civil engineering at Beijing. Costing 11.5 billion dollar and dubbed ‘starfish’ by Chinese media, it could potentially become the world’s largest and busiest airport providing the city with an essential second international aviation hub.

Although Beijing is considered one of the safest cities in the world, however over the past weeks it has undertaken extensive security crackdown. The already numerous guards patrolling the capital’s main hubs, street corners and shopping malls have been multiplied while random ID check-ups in subway stations have become daily routine for Chinese nationals. Common leisure activities such as kites flying, drones, balloons and domestic pigeons have all been banned. Beijingers usually receiving their online retail orders within a couple of days, have been seeing their deliveries delayed significantly by a government disposition commanding all packages entering the capital to pass through X-Ray.

The development of technologies and the arrival of the internet have been notably accompanied over the past decade by the creation of Chinese own replicas of Google and most importantly by the design of a ‘digital great wall’, restricting the access to most social networks such as Facebook, Twitter, or Instagram which in China are accessible only through VPN systems. In an extraordinary move to further control the web, even  clumsy VPNs have  recently been shut down and the upcoming days are expected to be accompanied by further intense crackdown on VPN usages.

On Monday, a New York Times correspondent in Beijing declared to have been intimated by an officer of the Beijing security bureau to leave his apartment, as armed police would be occupying his residence for the time of the celebrations, barring the journalist from having a view on the unfolding preparations.

The odd security measures implemented in the capital, stronghold of the ruling elite, come after recent intensification in surveillance measures throughout the whole country, a turn of the screw on Muslims communities in Xinjiang and widespread advancement in A.I facial recognition.

In the streets, the gravity and trepidation commonly accompanying solemn events are palpable. National flags are up on scooters, on houses’ entrances and on any street corner. On weekends, the area surrounding Tiananmen is locked down and under curfew. The city’s nightclubs are for the most closed since days up until mid-October. Last Friday, the crowd at ‘Dada’, an electro nightclub in a neighbourhood north of the Forbidden City, was promptly forced to leave the dance-floor little after midnight. Disappointed clubbers had no choice but to go back home as bars in the area were closed, abiding to the curfew. 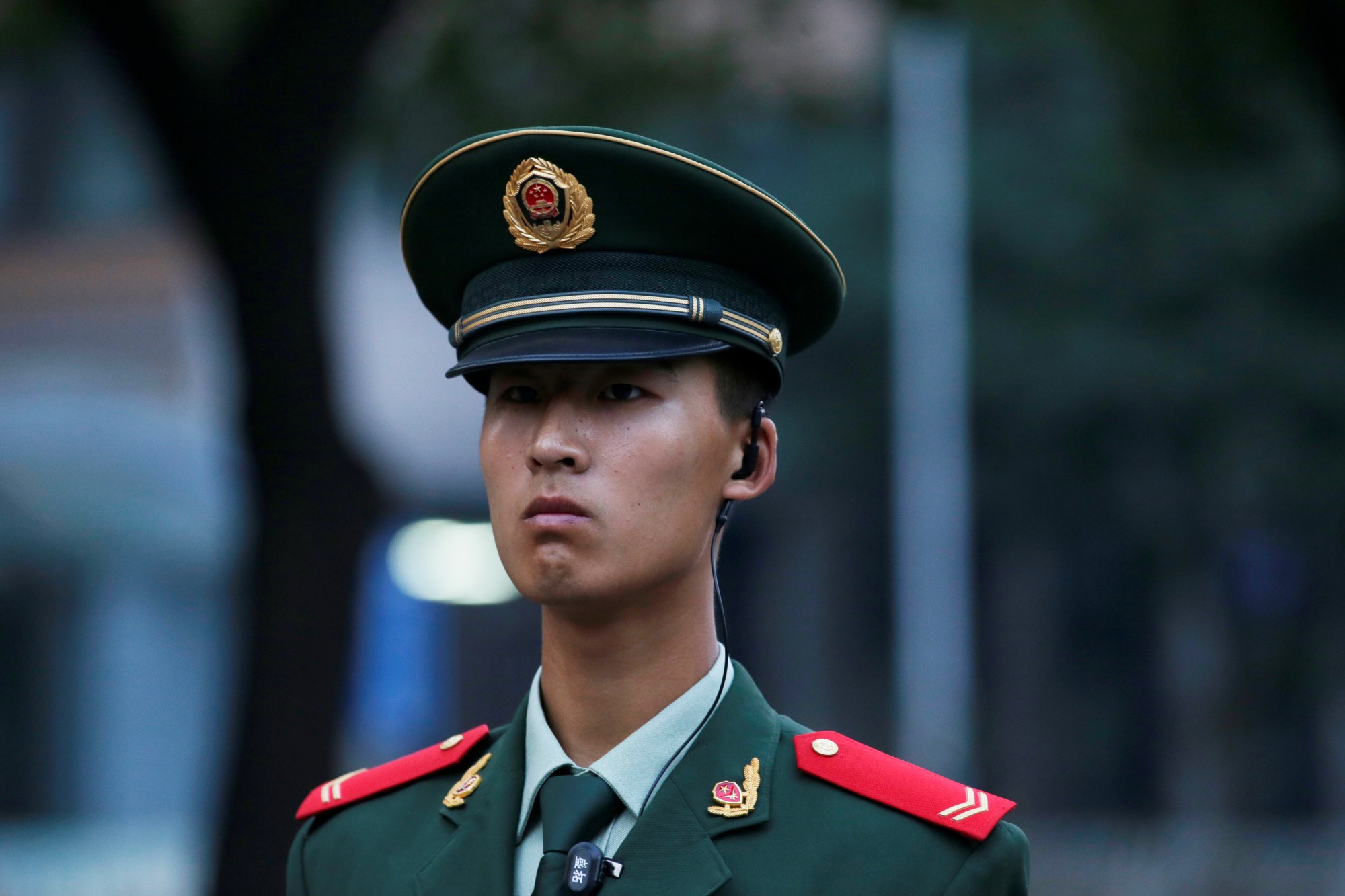 A paramilitary police officer stands guard as streets in central Beijing were closed off for a rehearsal of the military parade on October 1 to mark the 70th anniversary of the founding of the People’s Republic of China, in Beijing, China September 21, 2019. REUTERS/Stringer

The preparations are ubiquitous. On television, news programmes are preceded by individuals dedicating their passion for the motherland by reciting the telling words: ‘I Love China’. Even in the arts can the celebration be stroked. The country cinema’s billboards reflect on a nationalistic fervour and a careful artistic spirit. Released at the middle of the month, the biopic ‘Chairman Mao Zedong 1949’ revisits the history of the Chinese civil war from 1927 up until victory of the Communist Party of China (CPC). Other domestic releases – for the most glorifying depiction of national figures – include ‘The Chinese Pilot’, or still ‘My People, My country’, set to be released the 30th September, on the eve of the national day. The latest production, filmed around seven stories and celebratory events since the founding of the PRC, aims, according to the synopsis, at “awakening the common memories of Chinese people around the world”. 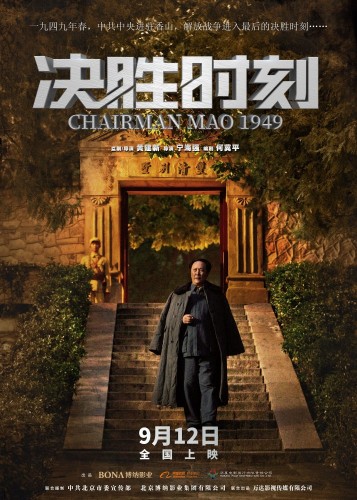 Less than a month ago, Chinese journalists have been announced to be soon tested on loyalty to Xi Jinping. From the very beginning Xi’s grip to power as chairman of the Communist Party in 2012 has been followed by a nationalistic surge. Considered the strongest figure since Mao, some see in Xi’s tenure a revival of the same cult of personality that reached its apogee under the Little Red Book’s inspirer. While tourists can buy the latter in souvenirs shops, at Tsinghua university’s bookstore, students can find Xi’s newest book ‘The Governance of China’ on front shelves.

The city is enthusiastically waiting: the banners are up, the red lanterns hung, and the military drilled however chaos continues to reign outside. In Hong Kong, some expect on October 1st massive mobilization by anti-government protesters. While soldiers will be marching and chanting on Tiananmen, the question remains how loud will the protestors in Hong Kong be? Beijing can shine as much as the Communist Party wants, discontent will continue to fill the streets of Hong Kong. Indeed, while the population in Beijing and outside the capital might buy the ‘Chinese Dream’, and ‘national rejuvenation’ ideals dear to President Xi Jinping, the long-term challenges facing the country abroad do not seem to fade.

One banner in the streets read: ‘The people have faith. The nation has hope. The state has strength’. The 70th anniversary is, more than ever in the past decade, a critical moment for the ruling party to maintain the citizens’ faith in the nation as its legitimacy and nature is challenged on the international stage. But no matter how impressive the coming national day and how fervent Chinese nationals will be, parades are mere mesmerizing events as shallow and ephemeral as 20th Century soviet regimes national celebrations proved to be.

On February 23, a 3-minute video with the title “Be A Lady They Said” was published on Instagram and soon after went viral across the…