Religion is a personal choice, not given by rationality but by faith. It is not required to understand, it is a matter of believe in it or not.

Accepted this fundamental assumption, for centuries philosophers, physicists, intellectuals and even mathematicians have investigated about the concept of God, trying to answer to the big question: “Does God exist?”

During the Seventeenth-century, the French philosopher and mathematician Blaise Pascal (1623-1662) tried to demonstrate the rationality of believing in God. His argument was the following: imagine that there are two hypothetical states of the world, in one state God exist, in the other state God does not exist, and individuals can choose between two options, believing in God or not believing in him.

It is possible to represent what we have just said as a rational game:

If God exists and you were believing in God, you will go to heaven and receive infinite gain. If God exists and you were not believing in God, you will go to hell and suffer infinite loss. Instead, if God does not exist, it does not make such a big difference whether you were believing or not, you gain in both case a finite amount of utility.  The finite amount can only differ of a finite number “c”, that is the cost of believing and practise the religion. As an example, “c” represent the cost of going to mess once a week, pray and follow all the formal rules that the religion imposes. Note that Pascal was Christian and, in his interpretation, believing in God (or not) did not mean only believe on it, but also behave as a Christian, thus follow the religious rules and customs.

The expected utility gained by choosing to believe is greater to that of choosing to not believe. Thus, it seems to be rational and profitable to believe.

It is important to remember that Pascal is not proving the existence of God, but more interestingly the rational interest on believing on its existence, whether it exists or not. Is he right?

But what about the implied assumption of God’s behaviour? Indeed, according to Pascal regardless of the life-behaviour of a man, if an individual does not believe in him, does not behave as a good Christian, he will directly go to hell. It means that it does not matter how much good, from a laic prospective, you have done in your life, if you have chosen to not believe, you will suffer infinite loss.

It can be argued that it is a strong assumption. Would it be fair to condemn people that have well-behaved in life to eternal suffering because they did not believe? In most of the modern and civilized democracies of the word, as long as you do not arm others, it is not possible to convict a person for what he is (atheist, homosexual, rich) or what he thinks (political orientation, preferences). Given the fact that even human beings are arrived at this conclusion, it seems to be rational to not expect less from the higher entity. It would be unlikely to see God punish people for their personal ideas, instead than for their actual actions.

There is only one place in the time and in the space where individuals are judged and punished for their beliefs, these places are tyrannies and dictatorships.

Let’s now imagine the same game of before, implementing the just developed discussion: 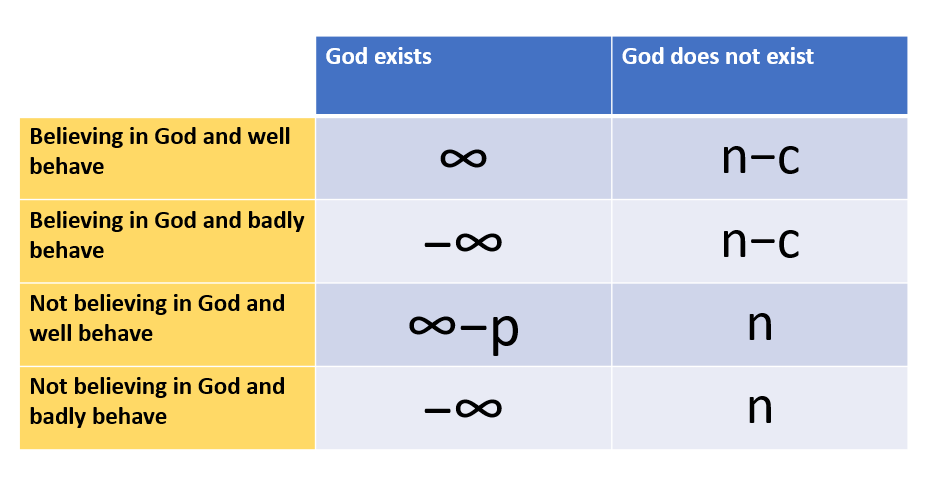 If you have murdered people or lived rightfully it does matter. If you do not believe in God but lacily behave well, you will not go to hell forever, but only receive a finite “p” punishment and then go to heaven.

Thus, the conclusion of Pascal completely falls apart. There is no rational interest on believing in God, but it remains a question of merely faith.

A possible fallacy of our argument could be that we are assuming a reasonable and benevolent God. A God that do not get offended too much by our lack of faith on him. But being him the superior being, it is sensible to argue that he will not lower himself to such a poor human sentiment.

In the end, with all its beauty, the only reason for faith is faith.

After watching both parts of the haunting HBO documentary Leaving Neverland three months ago, I didn’t quite know what to say. Sitting beside my girlfriend,…