A spectre is haunting Europe: it is the youth unemployment, which has continued to worsen, particularly in the advanced economies where young people paid the highest price over the course of the crisis.

The phenomenon of unemployment at a young age might have a lost-lasting impact and a tremendous effect on young people. The euro zone unemployment rate is far worse than official jobs data shows, with many workers willing to see a real increase in pay. Young people get trapped in the lower end of the labour market, with on-the-job training, lower wages and ever much strong long-term unemployment and less social conditions, facing for these reasons a higher risk of exclusion.

On May, the European Central Bank (ECB) has released its third Economic Bulletin for the year. In Issue 3, there is some interesting analysis on the youth unemployment and the degree of labour market slack in the Eurozone. What it can emerge is not a very rosy picture, despite the constant political claim “The Eurozone is recovering well”. The reality is that while the official unemployment rate is bad enough (still above the pre-crisis level and stuck at around 9.5 percent), the broader measures of labour slack indicate that around 18.5 percent (at least) of the productive labour resources in the Eurozone are lying idle in one form or another. The broad slack has also risen during the crisis in most countries – particularly the phenomenon of underemployment.

The economic crisis that hit Eurozone in 2011 placed a severe strain on the labour market, with inevitable repercussions on employment opportunities for younger generations. The most alarming data is the highest percentage of young people not in education, employment or training (NEETS) in Italy, at 19.9% compared to an EU average of 11.5%, the European Commission said in a report released in June. The number of self-employed is among the highest in Europe at over 22.6%, the difference between men and women in work is 20.6% and the number of people living in extreme poverty, 11.9%, rose between 2015 and 2016, an increase reflected only in Estonia and Romania.

Italy has held the EU record for NEETS for several years now and it will continue to have this record if economic policy strategy will not change their orientation based on social policy with strong repercussion on income distribution. 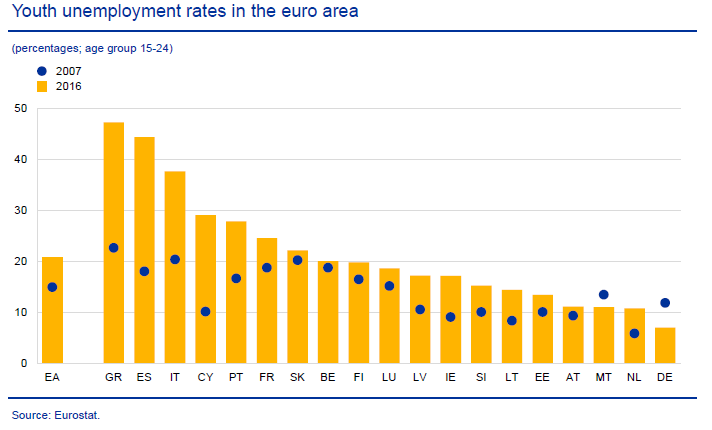 What is important is not that young people don’t look for work hard enough or employers cost too much – as economic mainstream dogma point out- but that there is a systemic shortage of jobs which have a very large impact on all types of workers, young and old, at the same time.  There has been a clear increase in inactivity among youth in the crisis years. Globally, the youth labour force participation rate decrease with the largest regional decreases in the European Union, where growing frustration over unemployment and underemployment has pushed a large cohort of discouraged youth to drop out of the labour market altogether. 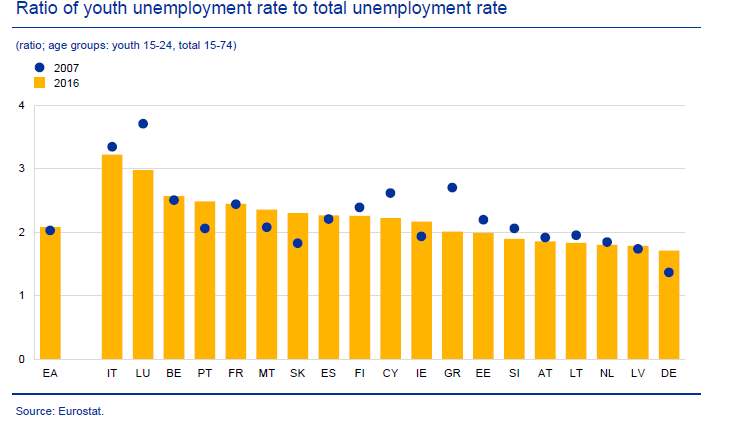 It  is important  to realize that the future perspective for Europe depends on its youth.  The IMF has estimated that, in the absence of concrete stmuli for relancing the whole economy, a period of 25 years is needed to reabsorbe the devastating effects that economic crisis has had on unemployment.

So, what is important to do in order to fight this emergential phenomenon can be addressed by three fundamental strategies:

Policy makers and technicians need to resume the dialogue with the reaserch sphere, in order to know dynamics and dimensions of the phenomenon and to act in an effective manner, closely monitoring the actions and then model the interventions. The data suggests the need for a re-thinking of the existence of this phenomenon, proceeding with a reconsideration of the youth and their values in the society.

To sum up, the Eurozone remains in much worse shape than some official statistics might suggest. Nevertheless, we are nearly a decade into the so-called ‘recovery’. 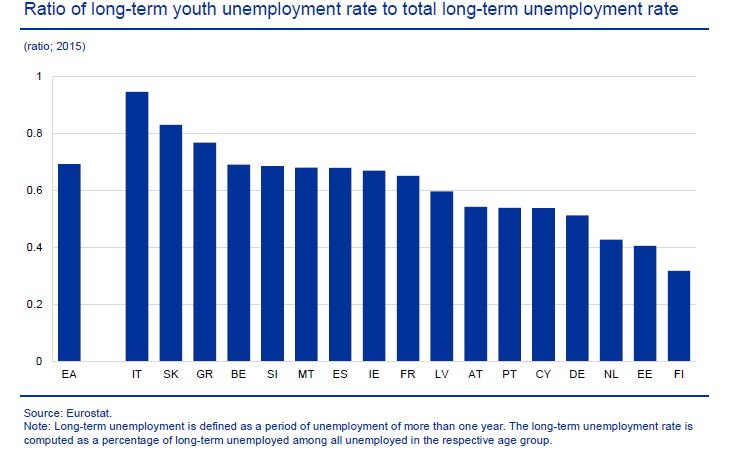 Sixty years after the Treaty of Rome was signed, a lot of work still needs to be done. The European Union is suffering the blows…