With the start of 2017 and the end of 2016, it is a good time to take a look back at what has happened in economics and politics, trying to find some causal relationship between facts and perceptions. The election of Donald Trump to the United States presidency, the outcome of the Brexit Referendum in the UK, the defeat of the constitutional reform in Italy and the increase of the popular support for all the anti-European parties, could be seen as an important series of events that will push the world in a different direction than that which it has been taking to date.

Some argue that this is the revenge of the middle class against the elites. It can be said that recent crisis has generated a long queue of disappointment against those who were supposed to protect us from such problems. This could be the main noticeable reason of the recent wind of distrust  against the establishment. People believe that someone is cheating them. In other words, an important part of the population is starting to believe that the establishment has the intention of stealing the public’s lives , and of exacerbating and not solving daily issues.

However, despite the fact that is undeniable that  the international institutions and national governments have been having a lot of problems in countering the recent socio-economic problems, it would be better to analyse the quality of the alternative. Because different could also mean worse. The new alternative political parties profess to give solutions to the issues raised by globalization, the free market and immigration. But, what is the truth? Is globalization building the ground for a poorer future?

Globalization has been giving to our politicians a lot more complex challenges to achieve than in the past. Indeed a dynamic world with global trade and diversified culture is more difficult to manage well than a simpler one. Moreover, complexity and internationalization left governments  with less power. It can be said that they have to consider more transnational economic factors before making every type of policy. As a consequence, their capacity of control alone all the aspects of the society decreases.

On the other hand, if we see the data we will show that we are not doing as badly as we think. We will analyze the data of three important areas of human society:

Firstly, according to the World Bank Group there has been marked progress on reducing poverty over the past decades. The world cut the 1990 poverty rate in half by 2015. More specifically,  in 2013, 10.7 per cent of the world’s population lived on less than US $1.90 a day, compared to 12.4 percent in 2012. This means that, in 2013, 767 million people lived on less than $1.90 a day, down from 881 million in 2012 and 1.85 billion in 1990.  The number of people living in extreme poverty globally remains unacceptably high, nevertheless, we can not say that the situation is worse than before. Industralization and capitalism (with all their defects) are boosting our economic growth and tackling poverty more effectively than we usually imagine.

Secondly, due to the fact that the economic well-being of a society does not depend only on money, we have to evaluate some other features, like the level of education. The following graph shows the estimates of world literacy for the period 1800-2014. As we can see, literacy rates grew constantly but rather slowly until the beginning of the twentieth century. And the rate of growth really climbed after the middle of the 20th century, when the expansion of basic education became a global priority. 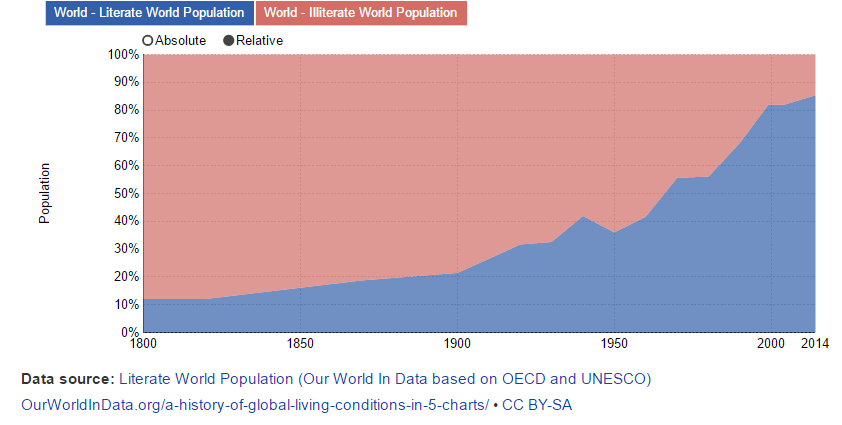 It can be argued that education became a national priority as a consequence of globalization and international competition. According to many sociological studies, the interest in having educated and competitive citiziens pushed  national governments to increase the public spending for the education system.
Thirdly, it would be wrong to believe that our present is a period of wars and pain. One reason why some people might have this impression is that many of the past conflicts feature less prominently in our memories. After the second Word War, thanks to international trades and interconnected economies, new conflicts have been becoming less convenient. Buying a product or a resource in the international market is less expensive than getting into a war in order to make it on your own. 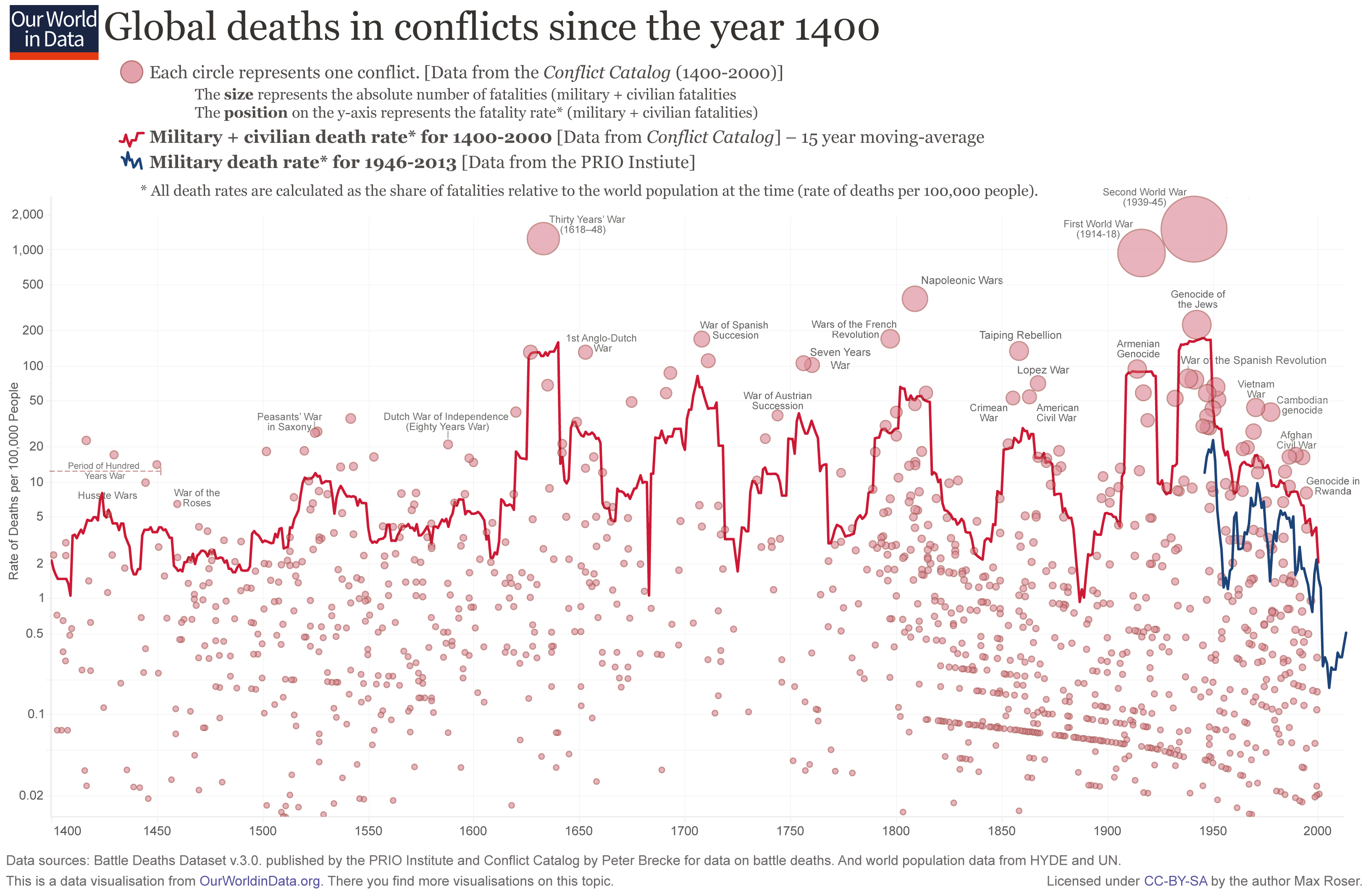 To sum up, we can notice how there is an important difference between our perception of the actual situation and the real data. In addition, we can understand how phenomena like globalization, international markets and free trade are not our enemy, but only opportunities that (as we have just seen) can give a lot of advantages to our society. Trying to solve our unsolved problems by closing our mind and societies could be only self-defeating and bring us back to a new Middle Ages.

Maybe the elites need a new marketing manager, because they are not selling their results very well.