Mert Serin, 23 years old, is a graduated computer engineer. He was born in Izmir (city on the Mediterranean Sea), studied in the capital Ankara and lived also in Istanbul and Adana (a big Turkish city close to the Syrian border). With him, we’ll try to understand better what happened in the month of July and why did it happened and which future an average, educated young man sees for his country and for himself.

We all know what happened the night of the last 15th July, but could you tell us why it happened?

To understand what happened that day, we actually should start from many years ago: from the Ottoman Empire. In fact, from the XIV century, Turkey and the neighbouring countries were ruled in a sort of theocracy by the Sultans that followed one after another. Since the French Revolution, the domain of these leaders was total and unconditioned, and their total power was both political and cultural. But after the Revolution happened, with time, liberal and democratic ideas began to reach the country and to undermine to power of the Sultans. A Parliament, even if puppet, was conceded to the people as well as other individual rights.  However, the XIX century has been very hard for the Empire because of the political and fiscal pressure of countries such as England and France, but also Italy and Greece. The hatred of the people against these countries grew increasingly bigger, and this is one of the main reasons that took the Empire to the First World War. After we lost it, from 1918 to 1923 happened the “Independence war” that set the borders that Turkey has nowadays and brought Kemal Ataturk to lead the country. He completely changed and evolved Turkey in a very liberal and modern state; just to give you the idea of what he did, I tell you that he changed the alphabet from the Arabian one to the Roman (increasing the alphabetization rate from 2 to 94% in a few decades), gave the right to vote to women (before any other European nation), started an intense process of secularization of the state (abandoning the theocratic ideas that influenced the politics of the country in the last centuries) and turned Turkey into a “Republic”. Unfortunately, Ataturk died young and after that also his friend and political partner İsmet İnönü retired and passed away too, a period of political instability began for Turkey: three military coups happened in 1960, 1971 and 1980 and radically changed the country, especially the last one. In fact, the one in 1980 abolished the Senate and dissolved most of the existing parties, changing the political situation completely. Even though in 1983 democracy came back after a few years of military dictatorship, many politicians left their job and politic life. People purged by the military coups have been silent for years, until Erdoğan came. The former mayor of Istanbul based his party and his climb to power also on them, and it’s also thanks to them that he became Prime Minister in 2003. He also became President of Turkey in 2014, as you know, but before that he had some, let’s say, “arguments” with some of his fellows, the ones that in 2011 created the “Parallel State”, as dubbed by Erdoğan.

What is this “Parallel State”?

It is the organization that Erdoğan accused to have organized the last military coup. Everyone presumes that is composed by former Erdoğan’s allies, following the leadership of Fethullah Gülen: a politician and Islamic “imam”.  He’s been an alley of Erdoğan since the very beginning of his political adventure, but after some corruption scandals happened from 2011 to 2013, there have been divergences between him and the President. Right now he lives in Pennsylvania and the US goes on refusing Turkey’s requests for extradition.

So, which ones have been your first impressions during the military coup? And do you think that Turkey would have been a better place with the victory of militaries and Gülen?

Well, since the beginning things looked strange to us about this military coup. Barely everyone understood it wasn’t a well organised one and that it was much smaller than the ones I told you before when we noticed some details: first of all, the bridges on the Bosporus were blocked just on one side, so people couldn’t go to Europe, but vice versa could go to Asia. Then also what happened in Marmaris, the city in which the President was on vacation, is unusual in that context: militaries first bombed the House of Parliament with the F16 jets, and just after it the infantry of the “traitors” moved to the house of the President to catch and kill him. Obviously Erdoğan had already left that place without any problems. Then militaries also occupied just one of the televisions of Turkey: except for the occupied one, the others were broadcasting, and also the very famous Erdoğan’s “Facetime” call happened! I mean, the militaries of the coup have not been able to block all the televisions of the country (and the headquarters of the broadcasters aren’t endless), and have neither been able to coordinate an action in order to get the President before blocking the bridges, bombing the Parliament and letting the world know that something was going on in Turkey. This also because not all the soldiers were in favour of the military coup and the revolting ones were just a small part (even if from the pictures the number of militaries of the coup could seem endless, it’s just a small part of the total: in fact, Turkey has the second biggest army of the NATO after US).

To answer to your second question, I don’t think that things would have been better with Gülen’s guys: they and Erdoğan are two sides of the same coin, a bad one. They both support this idea of “Neo-Ottomanism”, with an “islamification” of the country, destroying the process of secularism occurred with Ataturk. They want to destroy the Republican Turkey and let rise a  brand new and modern Ottoman Empire rise again.

In what is Erdoğan different from Ataturk?

In everything, actually. Ataturk is the leader that transformed our nation in a modern one, leaving apart religion and fanatics letting democracy win; Erdoğan wants to create a country based on Islam. Ataturk represents secularism and scientific progress, which is the cause and the consequence of free minds; Erdoğan represents a religious ideology. Ataturk rose the sense of belonging of Turkish people; Erdoğan is creating hate against who is different from him and his followers, and so against the Muslim Turkish people.

Do you think that Erdoğan organised himself a fake military coupe?

No, actually no. I read many news about it and I know that in Europe most of the people thinks he managed to organise it, even in Turkey someone suggests it, but I don’t think this is the case.

Because, unfortunately, Erdoğan has been elected democratically and he doesn’t have to prove anything to anyone; his power is lawful and recognised by the laws and the international community, even though a lot of people don’t approve of him. The most of the votes he received come from the East, where people are more religious and think he fits fantastically the characteristics of the perfect leader. Actually nobody can say anything to him, because the people chose him. He is the proof that democracy has some limits, and it’s just the “lesser of two evils” as a political system we could get, as Churchill said. I really think that Gülen and his followers organised it, maybe hoping in a chain action of revolts that would have decreased his power.

Wow, this is an incredibly complex situation. Finally, I would just like to ask you what future you see for yourself and for an average educated student in Turkey.

Well, I don’t see a bright one at all, of course! (Laughing). Students here are too much involved in the political situation to be able to focus just on studying. In the last year every month bombs exploded around the country killing people; we are very close to Syria (especially my home town) where the situation is maybe hotter than here, and we’re scared that that situation could move also to our country. This is not a calm place, every day there is something to worry about and we cannot focus just on our studies and jobs. Moreover, as soon as we finish university, we are going to find ourselves in an environment where the main goal is not to grow, with people going back ages ago culturally, and where there are not competitive jobs. Also for our own safety, we students see our future far from here.

Thanks a lot to Mert Serin for the interview and to Laura Ferroglio (PLT English) for the help in the realization of this article. 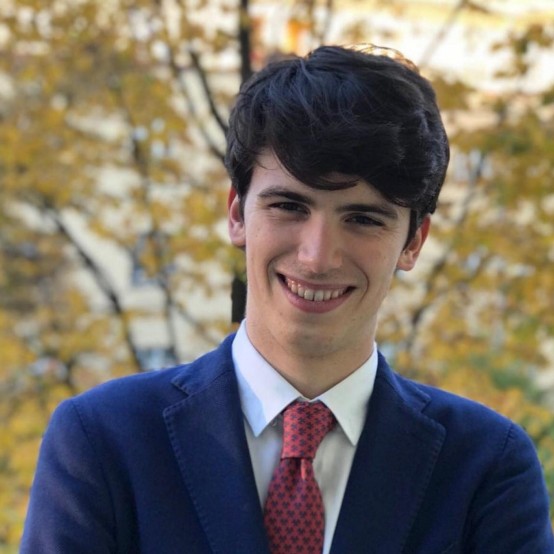 At the 2019 GovTech Forum in Paris, the Norwegian Minister of Digitalisation reported that he had just learned that 98 percent of Norwegian cows are…