In its effort to strike a balance, the country might be treading on thin ice.

It’s been two weeks since German chancellor Angela Merkel gave her pivotal press conference on COVID-19. Her statement was highly anticipated by the public: for the first time since the pandemic’s onset, there was real hope for stay-at-home measures to be loosened.

The careful optimism wasn’t unfounded: together with the minister-presidents of Germany’s 16 states, Merkel drafted a new set of guidelines for the coming weeks—while social distancing would remain in place, schools and retailers with up to 800m² of floor space were to reopen. But despite her appeal to proceed with utmost care, accusations of rebooting public life too quickly ensued.

Germany has handled the pandemic comparatively well so far, ranking as the second-safest country for weathering the outbreak. The reason why it wasn’t hit as hard as countries like the U.S. or UK is a combination of multiple factors: the number of tests, demographics, the quality of healthcare, but also chance events, i.e. how the virus entered the country and how it spread afterwards.

While Germany’s percentage of over-65-year-olds is higher than Britain’s or the U.S.’, the country has managed to ramp up testing efforts while boasting access to universal healthcare and the world’s second-highest rate of per-capita ICU beds (an either/or for the two anglophone nations). In addition, most early cases were imported from the Austrian ski resort Ischgl, limiting much of the initial spread to the afflicted athletes and their immediate families. 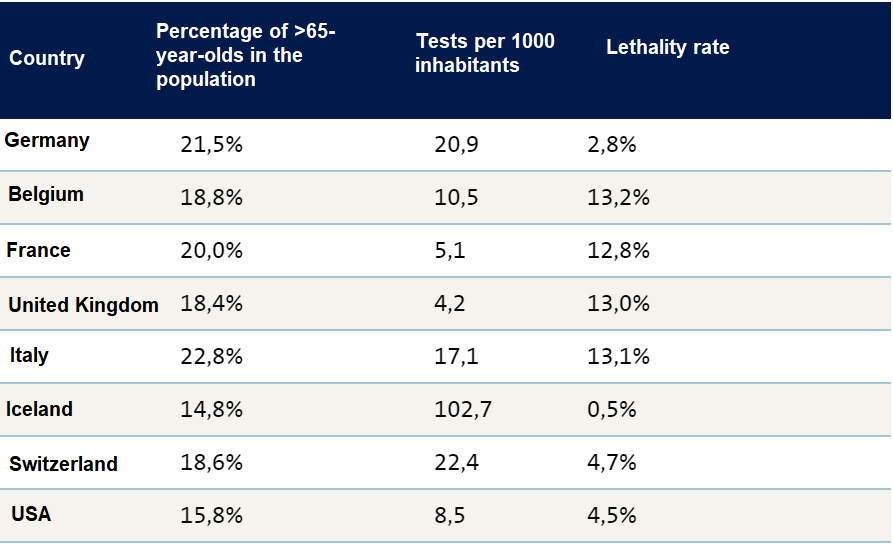 Of course there’s another crucial factor in containing COVID-19: the imposition of lockdown measures and public commitment to heeding them. It’s evident that Merkel, a doctor in quantum chemistry, knows what she’s talking about when stating that the virus’ “reproduction number has fallen to about 1,” but that “an increase to 1.3 would bring the German healthcare system to the brink of collapse by June”. The tiny maneuvering space that the government has speaks to the precarious balance—between giving in to economic demands and avoiding a second outbreak—that the grand coalition is trying to strike.

The biggest thorn in the chancellor’s flesh in achieving this balance is the country’s federal structure. While the federal government can announce broad guidelines, it is up to the 16 aforementioned minister-presidents to adopt them as they deem fit. This leads to case-specific solutions on the one hand, but also a general sense of being arbitrarily treated, as one state enacts significantly stricter measures than another for no apparent reason.

A few things have happened since the easing. While Saxony started out as the sole German state to make face masks mandatory in public transportation and stores, it has now become a nationwide necessity. On April 22, Saxony also became the first state to reopen schools for seniors, with North Rhine-Westphalia, one of the country’s COVID-19 hotspots, deciding to recommence just one day later amidst #SchulboykottDE trending as the most popular hashtag on German Twitter. Baden-Württemberg and Saarland on the other hand will only continue next week.

The list of regional legal patchwork goes on and on, ranging from confusingly high or low fines for rulebreakers to which facilities are allowed to reopen when and where. Just today, Saxony-Anhalt announced a new, significantly laxer directive, directly contradicting Merkel’s previous statements. Rarely has the inconsistency of federalism become so tangible.

The Hammer and the Dance

The chancellor and her minister-presidents are going to reconvene next week to discuss new steps. Major talking points will include the further reopening of schools, retailers, but also restaurants. Right now might be a decisive moment in determining Germany’s long-term strategy as two opposing paths emerge: on the one hand continued gradual easing, and on the other what Tomas Pueyo called “The Hammer and the Dance”.

While the former would imply a gradual rebooting of public life and the economy, the latter would mean “hammering down” the number of cases through a strict shutdown to a level where every COVID-19 contact can be traced, followed by a dynamic “dance” of loosening and tightening relatively relaxed measures. Germany’s current contact tracing capacities are maxed out around a reproduction number of 0.2, with post-easing numbers rising from a low of 0.7 at implementation to a current figure of 0.9.

All of this means one thing: Germany either bites the bullet of clamping down now to return to relative normalcy soon, or it gives in to more immediate public demands while risking prolonged harsher measures. To a large extent, it is a question of pleasing the people or the scientists—of bowing to the few experts or the many voters, taxpayers, and industry heads. But it is also a question of what to plan for: the now or the future.