This article wants to analyse the determinants that generate the gender gap in wages, starting from a research conducted by Kim A. Weeden, Youngjoo Cha and Mauricio Bucca titled “Long Work Hours, Part-Time Work, and Trends in The Gender Gap in Pay, the Motherhood Wage Penalty, and the Fatherhood Wage Premium”. The idea of my analysis comes from an article published by “The New York Times”, talking about the influence of working hours onto the gender gap. It says that families are clearly subject to a discrimination in behaviour, since motherhood leads to a constraint onto working availability, and therefore “greedy” jobs do clearly take advantage of those people who do not have these kind of limitations, i.e. fathers or singles. In particular it says that “the returns to working long, inflexible hours have greatly increased “.For this reason, in the article, by Claire Cain Miller, it is introduced a so called “overwork premium”, to stress the increasing impact that the amount of hours spent per week have onto the salary level. Of course, some decades have passed since the first time salaries marginally increased, given the amount of hours spent by  workers. But today, more than before, this kind of differential has increased, leaving people like mothers to be victims of it. Here is the point I want to underline in my study, trying to figure out a possible trend deriving in the gender gap because of an increase of working hours and then I would like to show a possible  correlation that there would be among working hours and other variables, including the gender and the level of study. At the end of the day I would like to point out all the potential determinants of a gender gap in ages, both under a regression looking at the effects on salaries and at the effects on working hours. In order to take my analysis coherent I decided to drop observations, from the data I used, of those categories of people that were not dependent worker. I want to focus onto this group of people because the academic literature I base my work onto always deal with people being under the employee status. Moreover, I use data coming from different years to find out the existence of a potential trend.

In my analysis I use Shiw dataset from Bank of Italy.  My study looks at dependent workers category only and uses data coming from different years: 2004, 2008, 2012, 2016. The observations in these four different years do not differ too much: 2016 has 4514 observations, 2012 has 5555 observations, 2008 has 5965 observations and 2004 has 6014 observations. The analysis focuses its attention onto two key variables: “oretot”, which represents the number of hours worked by each observer weekly and “wlm”, which represents the weekly salary earned by each observer. The mean and standard deviation of these variables varies in the four different years. In order to make data coherent I created a variable calculating the Cook’s distance (“c”), and I considered only variables being smaller than 4/n. In this way I deleted potential outliers. The regression I make in my analysis is an OLS regression.

The results I get from my research need to be considered under two points of view, starting from an initial underlining of the hourly wage gap between women and men. In a first analysis I looked at the existence of a potential trend among data in terms of the impact that weekly working hours has on the weekly salary. In principle, if my predictions were correct, the impact of working hours should increase passing the time, from 2004 to 2016. In fact, what I would expect is an increase in the level of earning due to a more generous amount of hours spent by the worker. The results of my regressions is a coherent mirror of this prediction, since it can be inferred, by looking at the values of coefficients, that the impact of working hours has increased during the last two decades. The table below shows the result of my regression, considering other possible determinants of the level of salary. I created two dummy variable, one for the gender, where d_sex = 1 is for women, and one for the level of study, where d_studio = 1 is for subjects who studied at university. From the regression below it is possible to capture a trend on the impact of “oretot” onto the level of salary. Let’s start from the fact that the constant has been reduced over the years, such that the wages now are lower in their amounts. Starting from this analysis it is possible to capture an increase in the impact of the variable representing the number of hours worked onto the level of the salary. In 2004 and 2008 the coefficient was positive and around 4, while in 2012 and 2016 the coefficient was positive and around 6. But, being the level of wage lower in 2016 compared to 2014, the value of this coefficient is much larger in percentage. Moreover, from the regression below it can be seen that there is a reduction onto the impact of being a women in the salary, but as denounced in the paper I based my analysis on, the gender gap is potentially fueled by this tendency to value the number of hours worked more importantly than others determinants for the salary. 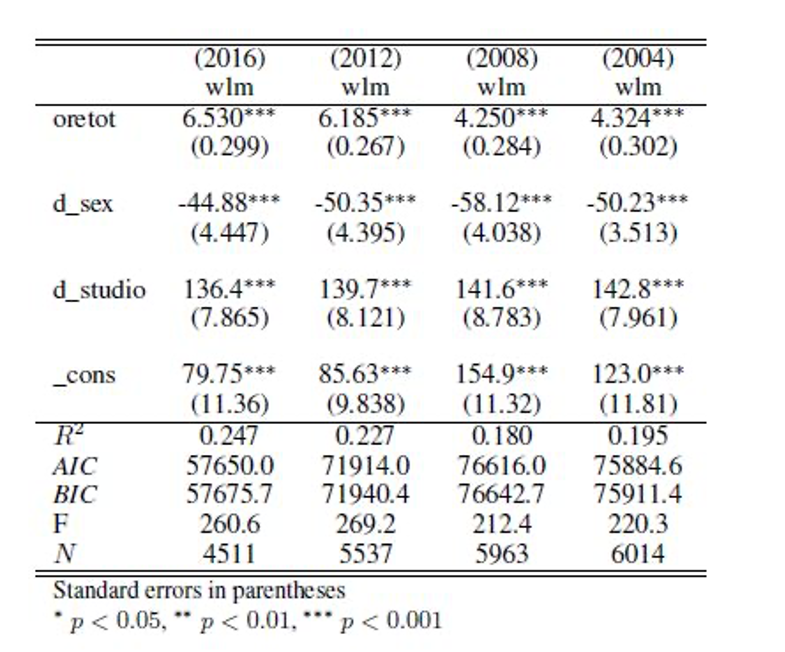 In the second part of my analysis I just wanted to show that there is a correlation in the number of hours worked in a week with the gender. In order to make this analysis coherent I needed to look at some variables that characterize my regression, starting from the weekly wage and the level of study (by using the same dummy I used in the first part). As a result, what I get is that the impact of being a woman in the number of weekly working hours is negative. This result confirm my predictions. From the table below it can be seen that a woman has a negative impact onto the level of working hours (-3), such that the average level of working hours in a week for a woman would be of 29, while for men of 32. Moreover, from the regression, it can be inferred that studying more would lead to a reduction of working hours and that clearly, an increase of the wage would lead to an increase of the salary. 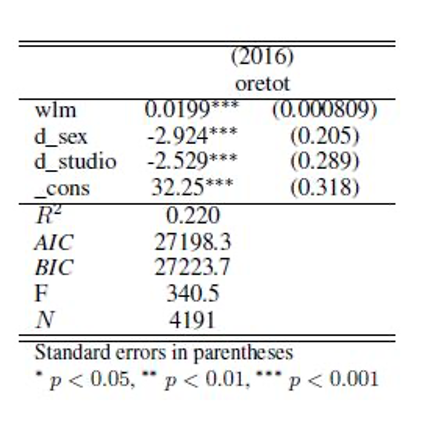 This results confirms what was presented in the paper by Kim A. Weeden et Al. and shows, therefore, that women works less hours than men and that, as a  consequence, the wage gap increases. The problem is that, unless the governments will regulate this effect, by denouncing this effect and by giving incentives to firm not to increase the level of salary for people working more than say 35 hours, the result is a gap that will never be limited. The problem is both cultural and economical. First of all it is wrong to keep considering women as being the gender that should mainly worry about family and children, since the society has evolved and nowadays women and men do both contribute to the economy of a country. A solution would be that both women and men contribute to feed and take care of their children, in an equal way. However, since it is not possible to solve this cultural problem in few years, at least it would be great if firms will start being aware of this effect and, pushed by a sense of morality, will not acknowledge so much the number of working hours in the level of salary.